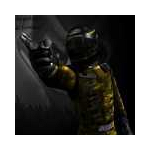 Lo Scassatore, AKA A-Rag, is an italian male racer, track author, mod and pack maker. His most important creations are available on the Alias Re-Volt Master website. These include 2 Re-Volt Drift Packs, the Re-Volt Formula 00 and Re-Volt Crazy Kart Mod.

In the Re-Volt Crazy Kart Mod are included several original kart-style tracks made by him, some of them are also available on RVZT as single tracks.

On his Youtube Channel, he has published a complete video-review of all the races of the ARM Special NASCAR Rollout. It is a special event that introduces the ARM NASCAR Champioship.

He has also dabbled with repaints which can be seen in his WTCC Car Pack, available on Alias Re-Volt Master.

Also He Released A KKC 2013 Event That Come Ingame

Retrieved from "https://revolt.fandom.com/wiki/User:Lo_Scassatore?oldid=16631"
Community content is available under CC-BY-SA unless otherwise noted.