Trolley is a Stock Model in Re-Volt. It is seen as a generic shopping cart. The model lies in the "...\Re-Volt\cars\trolley\" directory; however, its texture is loaded via the SuperMarket 1 folder.

Through the CARNIVAL cheat code, Trolley is playable as a vehicle, however, it will lack its textures as the .bmp file is not present in its respective folder. This was fixed in RVGL. Trolley in the non-patched version of Re-Volt on the other hand, requires more effort than entering CARNIVAL in the Name Wheel, as exemplified in the Under the Hood article.

The Trolley is only seen in SuperMarket 1 and SuperMarket 2. It is located near the exits of the stores, immediately after the checkout registers. Due to this, it acts as an obstacle within these tracks, using its heavy weight to bring vehicles to a halt upon contact. It is still able to be moved around by cars in the game. As such it creates an original and realistic obstacle for the virtual R/C cars.

As a playable vehicle, the Trolley is easily the heaviest and largest vehicle in the game, as logically it is not a radio-controlled car. All of its stats however, are lackluster.

The vehicle's top speed is only 28 mph (45 kph), far lower than many Rookie cars despite it being classified under the Pro rating. Its acceleration is horrendous, as it is incapable of clocking above 1 m/s². Trolley is infamous for flipping on its side when making turns at moderate to high speeds.

Overall, the Trolley lacks performance, although this is understandable as it is a cheat-enabled vehicle. It is indeed a fun vehicle to operate thanks to its excessive size. 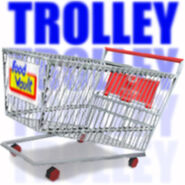 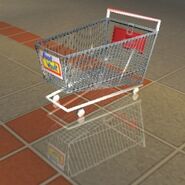 The Trolley as seen on SuperMarket 1.