Toytanic 2 is a track created by Acclaim Studios. It is the final standard track in game, as well as the final race of the Platinum Cup Championship. While Toytanic 1 is set in the day, this track takes place at night.

Toytanic 2 and 1 use the same cruise model and racing line. The only apparent difference is the weather and the start position. In Toytanic 2 the race starts on the top floor and the weather is rainy. The track also features a stronger rocking effect which simulates the ocean waves.

Although the racing lines for both tracks are identical, in this rendition of Toytanic, racers now start on the top floor, where the smokestacks and horns of the ship are located. Players must traverse around the pipes and head for the cabin, where the driving controls are located. Exiting the cabin is done by a left turn, resulting in a long straightaway to the back of the ship.

The straight path leads to the red-meshed enclosure. Here, there is a right 180 degree turn towards a ramp that then results into the lower floor of the ship. As in Toytanic 1, the straights here are divided by a wall, with the right side sheltered but illuminated with lights, due to the time and weather. The right path has Pickups but there are also decks chairs placed across the lane. The long path leads to a wide upwards jump towards the front deck of the ship, which quickly unfolds into a sharp right turn. A downward jump then ensues to compensate for the upward jump, and racers will have noticed they have arrived at the point where the starting line of Toytanic 1 was.

Another straight path with the same wall divider ensues, which eventually leads into a right corner that takes the racer around the ship's pool. At the end of the corner is a narrow ramp, taking them to the second floor. A straightaway occurs again, albeit narrower on the second floor. Two 90 degree right turns occur consecutively, resulting in a short ramp to the top floor. A sharp right must be undertaken as soon as one reaches the top floor. The starting line follows immediately after yet another right turn.

Toytanic 2 has a stronger rocking effect than Toytanic 1's, as well as a slight alteration in trajectory, due to the rainy weather. As a result, the changes between the top speeds are more erratic. This becomes crucial if it occurs before corners, as the difference between gaining speed before a corner and losing speed at a straight can become quite drastic, requiring a factor of luck especially in Time Trial. Toytanic 2 is quite dark, so it may be difficult to see the surroundings of the track. Fortunately, this may be rectified by increasing the brightness under Options.

The corner right at the the entrance of the top level has become a more important section of the track due to the change in the stating position. Colliding against the wall here, especially in the last lap could make or break or race, whereas in Toytanic 1 making a mistake here would be less detrimental as a player is given ample time to recover, as the starting line there is located on the lower floors.

Aside from these differences, most of the obstacles remain the same due to the same racing line. These include the tight narrow corners especially at the second floor of the ship where vehicles may understeer, the deck chairs which may obstruct the path of various vehicles, and the possibility of falling into the pool.

Overall, Toytanic 2's difficulty of Extreme remains disputed due to having the same course layout as its daytime counterpart, which is set at Hard. The track is also considerably easier than Museum 1 as a result, despite the fact that Museum 1 is also listed as Hard.

The strategies between both tracks do not differ greatly. As before, a fast car such as Cougar or Purp XL should suffice thanks to the straight paths along the sides of the ship. Those areas are also excellent for firing items such as Fireworks or Water Balloons as the straightaways leave the opposing vehicles defenseless.

The narrow paths on the other hand are a good place to deploy trap items such as the Oil Slick, especially right after the 90 degree corners of the second floor where they are given little time to react and dodge. Again, grab the Pickups on the shelter whenever required but avoid the deck chairs, especially the ones that encourages shortcuts as they are too risky.

The Global Pulse is located on the left dead-end corner of the steel-meshed enclosure, the area right before the bottom floor of the ship.


In the PlayStation version, the star is hidden behind one of the ship's smaller horns, right after the start of the top floor and before the starting line.

The Practice Star is located on the front deck of the ship, a few meters where the starting line of Toytanic 1 was. It is floating in the middle of the path, where the player needs to use the red ramp to pick it up. By now the player will have access to almost every vehicle, so theoretically it is quite easier. A fast car such as Cougar should be able to snag the star.


In the PlayStation version, the star is instead located beside the water pool, on its bottom perimeter. 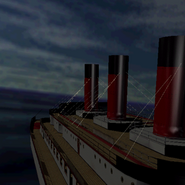 Path between the horns, and the straightaway to the back of the ship.

Entrance of the control cabin.

Straight path to the back of the ship, where the global star is located.

Circular ramp that takes the cars to the first floor.

Straights divided by a wall.

Front deck of the ship.

Top floor of the ship, near the start grid. 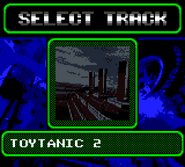 Retrieved from "https://revolt.fandom.com/wiki/Toytanic_2?oldid=18233"
Community content is available under CC-BY-SA unless otherwise noted.