Toytanic 1 is a standard track created by Acclaim Studios London. It is the second track of the Hard difficulty. The track's name obviously is a play on the name of the British ship the Titanic.

Toytanic 2 and 1 use the same cruise model and racing line. The only apparent difference is the weather and the start position. In Toytanic 1 the race starts on the first floor and the weather is sunny. The track also features a rocking effect which simulates the ocean waves.

Racers start on the first deck of the ship. Ahead of them is a very long straightaway, with a divider that splits the road into two lanes. The right lane which is sheltered, contains Pickups but is littered with outdoor chairs. At the end of the long road is the ship's leisure section, containing a pool coupled with beach balls. Racers go around this section, and head to an incline taking them to the middle deck of the ship.

On the second floor, another long straight ensues, although it is quite narrower than the first straight. The straight contains a wooden ramp, enticing racers to jump over the lifebuoy arc. At the end of the straightaway is a 90 degree right turn, which leads to another of the same turn back to back. Another ramp is seen just a few meters ahead, now taking the racers to the top of the ship.

A sharp right occurs right after the vehicles make it on the top floor. Racers then go around the pipes of the ship in order to reach the front cabin. After exiting the cabin, there is a long stretch that eventually ends in a left turn, taking the vehicles to a small steel-meshed enclosure on the second floor. Here, racers will make a sharp 180 degree right turn, leading them right back onto the bottom deck.

The same divided straight as seen near the start line occurs again, which eventually leads to a large jump to the front hull of the ship. There is a sharp right bend at the end. Following the path takes them to the final jump back to the starting line, completing the lap.

A unique feature of the Toytanic tracks is its 'ship turbulence', which stimulates the rocking effect of the ship, caused by ocean waves. In gameplay terms, this increases or decreases the vehicle's top speed periodically. In Time Trial this has a luck factor as it is desirable to have the increased top speed on straightaways. In other modes, racers should be cautious if the top speed of their car increases right before a corner, which could mean disaster if one is not careful. Luckily the turbulence is less drastic in Toytanic 1, compared to Toytanic 2 where the waves are immensely more rough.

Although most of the track consists of wide straightaways, Toytanic 1 is formed by several 90º narrow corners which pressure various cars to understeer. There are also ramps and elevations which are transitions from one floor to another which are characterized by their distinctive red steel mesh surface. These areas may prove to be a problem to vehicles with poor stability stats.

Toytanic 1's corners, especially the corners on the top of the ship are open-ended, and could cause confusion for some racers. By following the directions seen on the HUD, this hazard can be prevented. Deck chairs, lifebuoys and chimneys are part of the track's obstacles list.

The pool on the ship is a water hazard, punishing those who cut through the bend recklessly. Vehicles who fall into the pool are unable to get back up on the track under normal circumstances, requiring the use of repositioning as the only way out. There are also deck chairs scattered across the track, which prove to be a nuisance at times.

Ultimately, while Toytanic 1 is a track with many long stretches, the apparent simplicity of the track is complicated with multiple obstacles and tight narrow corners that can occur abruptly, especially after the end of the straightaways.

It is best to take advantage of the track's straights rather than its corners and ramps. Consider forgoing stability and go for speed when selecting a vehicle. Cars such as Panga TC, R6 Turbo, or Zipper have the potential to perform well in this track.

The Pickups in the shelters of the straightaways can be worthwhile when players are in need of an item, since the deck chairs are easily avoided as obstacles. Caution is nevertheless advised, however.

The wooden ramps should be avoided, in particular the ramp that allows vehicles to cross the pool, and the ramp for the lifebuoy arc. The pool ramp is not optimal as there is a large risk of failing the jump, causing the responsible vehicle to fall into its demise into the pool, wasting a lot of time. Most vehicles will lose control or will be forced to make a sharp right turn after landing if they do manage to make the jump, due to the height of the jump and the landing point being inconveniently located right before a wall. The lifebuoy ramp wastes time as vehicles will almost always hit the lifebuoy, rather than go through it.

Finally the narrow straights, especially on the second floor, and the ramp that exits the steel surfaced enclosure are good positions to use Clone Pick Ups and Oil Slicks, as the small width of those sections guarantee hits. In addition, the straightways are also good places to attack with a Water Balloon or a Firework as the open road leaves racers vulnerable.

Toytanic 1's layout has been modified by Tsunami Visual Technologies for the arcade port (as other six tracks from the eleven available in the port)[1] as an attempt to make the track easier suitable for all players.

One major difference in the track layout is that instead of making the first 90 degree turn on the second floor, there is a large ramp that launches racers of the second floor and pitting them to the front hull of the ship instantly. This essentially omits more half the length of the original track (742 meters originally and 350 meters in the arcade variant).

There are also a multitude of anchor points and lifebuoys that act as a barrier throughout the racing line, as well as speedup gates on many of the ramps to help vehicles make the jump, such as the wooden ramp across the pool.

The Global Pulse is located on the steel-meshed enclosure, on the far left. Here, the star is located at a dead end. It is visible when one enters the area.


The Practice Star is located a few meters before the finish line, floating in the middle of the path, where the player needs to use the red ramp to pick it up. A car with a high top speed is required. For the Semi-Pro rating, vehicles such as Pest Control or RV Loco are recommended.

Although not impossible, it is extremely difficult to nab the star with an Advanced car, which is the highest rating one would have access to as soon as this track is unlocked. For those cars, they would have to hit the right deck chair after launching from the ramp. With a lot of luck, if the vehicle hits the chair at the correct angle, they would be launched into the star.

All stars in this version are Global Pulses.

Located beneath the diving board.


At the end of the diving board.


Ahead of a wooden ramp. The star is airborne, so a decent amount of speed is required before driving on the ramp.

In the air ahead of the large ramp that follows into the front hull of the ship. A massive amount of speed is required to reach the star.

Located beside a row of anchor posts. It is directly below the large ramp that transitions into the front hull of the ship. 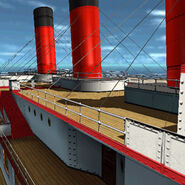 The ship's left side, and the lifebuoy jump at the second floor.

Cars climbing to the third floor of the ship, and some others driving to the control room.

Top view of the route that must be navigated by the players.

The room with the ship's controls.

Landscape of the arcade machine variant. 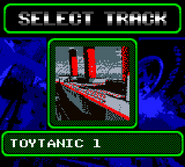 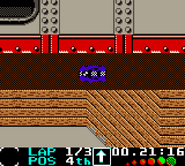 Sprinter XL in the GBC version of the track. 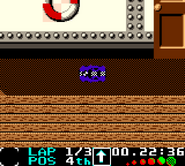 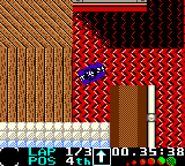 Almost 13 seconds before, probably in the top of the ship. 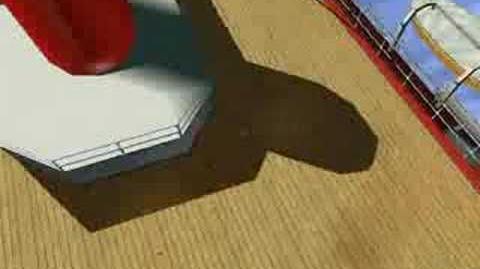 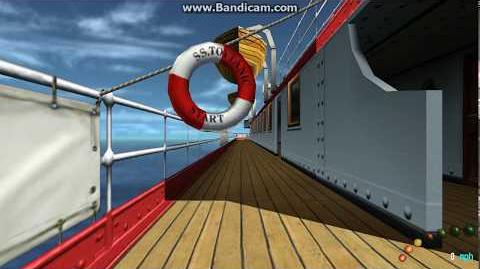 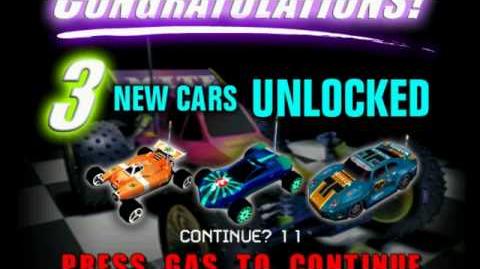