Toys in the Hood 2 is a Re-Volt standard track created by Acclaim Studios. It is the first track in the Hard difficulty.

This level features a more complex neighborhood: It has realistic houses, gardens and sprinklers as land obstacles, house items such as doors, skateboards, kitchen chairs, and a garden river with more routes and bridges.

Racers start at a street in the neighborhood. The beginning of the race is marked by a pair of briefs labelled 'Start'. The street follows a wide right bend, which gradually decreases in elevation. A long straightaway ensues which also passes by a cross-intersection, taking the players into the interior of a house first.

Into the house, there is a sharp left corner that leads into the kitchen. At the kitchen, vehicles then exit into the house's garden which consists of a narrow left bend, leading into a shed in the garden. The garden leads into a tarmac alleyway, in which there is a 90 degree right turn at the start of this section.

A hard left occurs as soon the vehicles enter the yard, and ahead of them lies a small passageway into the garage of another house. Players exit the garage by making a right turn, taking them back onto the left side of the intersection. Another straight occurs here, leading to another backyard.

The backyard here consists of water-filled trenches. Racers can take the wooden bridge and platform that lies on top of these trenches to go over them. The backyard ends in a narrow path, taking them back to the starting line with a right turn into the street, completing the lap.

Different from the original Toys in the Hood in the Bronze Cup, which is limited to a wide street and a small construction site, this track extends its racing line into the houses' backyards, featuring a lot of obstacles, such as skateboards, trash cans, shed ramps and sprinklers. The many components of the alleys between the gardens are formed by very narrow corners which makes it easy for vehicle to collide against the walls.

All of the gardens are comprised of grass surfaces, which impacts of the grip of many vehicles. Cars with average to poor grip, such as NY 54 may experience trouble in these sections.

The last garden in particular contains a small stream and bridge, and is considered the most difficult point of this track. It is very bumpy, featuring sharp increases in elevation that lead into the final alleyway. As the final section of the track, how well vehicles perform in this section could be the difference between losing and winning.

Although slightly more difficult, it is possible to take the right sidewalk instead of the street at the first corner. This is only possible in laps other than the first lap as the entrance to the sidewalk is located a little before the start line.

The alleyways are also narrow, making items such as the Clone Pick Up and Oil Slick quite effective. Consider placing them right before the corners for maximum utility. A Ball Bearing is also useful here especially at the blind corners.

With a plethora of narrow entrances into the backyards, it may also be wise to reduce speed before entering the section, especially with the grass surfaces that is encountered as soon as the vehicles enter the garden. By doing this, cars can maintain maximum traction and control.

It is best to avoid any ramps whenever possible, including the small shed after the interior of the house. Instead, players should go around it. Furthermore, in the final backyard, racers should drive right under the bridge, and go across the plank whenever possible.

The Global Pulse is located on the left sidewalk near to the start line, beside the red parked car. The entrance of the sidewalk is right under the car.

The star is located on top of a trash can which lies outside of the garage. Vehicles will need to take a left at the intersection and hit the wooden ramp at the correct speed and angle to grab the star. It is also advised to move the cone away from the path, as it is somewhat an obstruction in the player's path.


In the PlayStation version, the Practice star is instead located on the top of the red car near the start line. In order to reach the top of the vehicle, players must drive over the wooden ramp located at the front of the car. 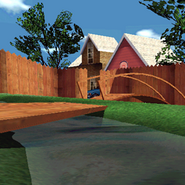 Toys in the Hood 2 gfx art.

Through the house at the intersection.

Adeon and JG-7 race across the kitchen towards the first backyard.

Vehicles make a tight turn on the hairpin at the first alleyway.

The second alleyway takes the vehicles to the next backyard.

Towards the final garden.

Exiting the final passageway, back onto the main street. 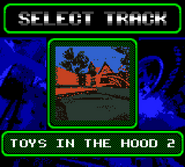 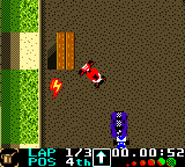 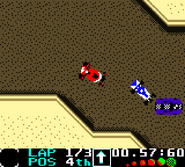 Retrieved from "https://revolt.fandom.com/wiki/Toys_in_the_Hood_2?oldid=18222"
Community content is available under CC-BY-SA unless otherwise noted.