Toy World 1 is a standard track created by Acclaim Studios London. Including Rooftops, it is the sixth track in game. As the name implies, the area is themed around a huge children's playroom. Toys such as trucks and arcade games can be seen littered throughout the place.

Racers start on a short timber-floored straight. Ahead of them is a helicopter marked with the letter 'P', which then hovers upward as soon as the race starts. At the end of the small straight is a tight S-bend, which leads to a moderate-elevated green-carpeted incline which then steers to the right. This leads to a second timber floor with another brief straightaway.

The second straightaway leads to a wide blue-carpeted slim-elevated staircase curve. Alternatively, players may bear to the right, which consists of a narrow path that finishes at a dead end. From there, the vehicles drop-off back into the main path where the staircase was, transforming into a very long straightaway that compromises an interactive electronic keyboard narrow strip that racers must drive on to progress.

A wide right curve then ensues, which takes the racers under a green dinosaur toy, placed right under a dip of the track. Following the dip is another slight right bend that gradually increases in elevation, which climaxes onto a steep ramp. Racers fly off the ramp, taking them back to the start line on the lowest floor, completing the lap.

In Reverse mode, racers travel into a room that lies right beneath the large ramp. This leads them into the dinosaur toy. There is also a dark yellow tunnel located after the interactive piano that is exclusive in this mode, which is the path that needs to be taken instead of climbing up the stair case. The tunnel ends into a tight hairpin, which takes them into the path that lies right before the peak of the staircase.

A large portion of Toy World 1 is covered under carpeted barriers which have a small but noticeable difference on grip than surfaces such as the tarmac in Toys in the Hood 1. As such, while some vehicles with adequate grip like Aquasonic may suffice, other cars with poor traction such as Pest Control will have higher difficulties with the track.

The blue stairwells is easily the track's biggest obstacle. The consecutive and sudden elevation drops are a challenge for vehicles with poor stability, such as Genghis Kar or Mouse. This is exacerbated as the obstacle is also a bend, forcing vehicles to also turn while running down the stairs. Although this is not present in the right path, it is compensated from the large drop-off at the end, punishing vehicles whose suspension is relatively stiff.

The legs of the dinosaur toy is also an obstruction in the tracks. Vehicles who do not align themselves at the start of the dip which follows right after the bend will collide with the pillars, wasting precious time.

Finally, in the lower passageway which lies ahead of the racers in the start line, as well as in the entrance of the dark yellow tunnel in Reverse mode, there are building blocks stacked on the track, obstructing the racing line. Colliding with the blocks will cause the responsible vehicle to lose control, and collapse the stack which then scatters the ABC blocks all over the place. The blocks after being scattered is still a reasonable obstacle in the course. Avoiding them is quite difficult, barring vehicles with excellent maneuverability, such as Dust Mite.

The track's straightaways are a critical section for the use of Fireworks or Water Balloons, making aiming a lot more easier than normal.

An Oil Slick on the narrow path that lies on the right side of the staircase is extremely effective, as it forces opposing vehicles to take the more difficult route instead. The AI also seemingly uses this strategy as well. Another inevitable trap is to place the Clone Pick Up on the electronic keyboard. The keyboard is very narrow that the hit from the fake item will be guaranteed.

Finally, a Ball Bearing is most effective at the area with the dinosaur toy, as the dip is a blind corner, causing unsuspecting racers to run straight into the item, or swerve away from it and risk hitting the green pillars.

The Global Pulse lies on the left of the blue-carpeted stairs.

The Practice Star is before the soccer field behind the final ramp. Vehicles must drop off at the ramp at the slowest speed or risk flying over it. The star can quickly be obtained by heading towards the floor below the ramp, then taking a sharp left after exiting the floor.


In the PlayStation version, the star is instead located in the middle of the dark yellow tunnel which is used in Reverse mode.

Before the final release of Toy World 1, an early version of the level was created by the developers, named just as 'Toy World'. The first difference appears in its length, being twenty-three metres longer. The level is a feature of the Canned version of Re-Volt, and most of its textures and mesh can be found in the source code. As well as textures, the model contains evident differences, especially the great variety of unique instances never released in the final version. The so-called level "canned Toy World" does not provide a path for the Reversed Mode, but contains a non existent path in the current version used by the cars to return to race when falling inside the pit. The Toy World 1 was received a nickname of "Toy-Lite" from the developers, indicating that the released version is a simplified version of the original track.[1] 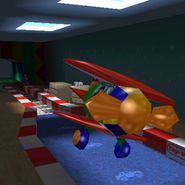 The green-carpeted incline after the S-bend.

RC preparing to make the final jump of the track.

The undercover floor seen in reverse.

The tight hairpin seen in reverse. 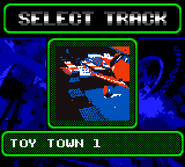