Beat the Challenge times in Mirror
SuperMarket 2 is a standard track created by Acclaim Studios London. It is the second track in the Bronze Cup Championship. It sets the racers in a small grocery store. In the middle of the track lies the storage freezer, which is the track's most distinctive feature.

Racers start at the entrance of the supermarket. Ahead of them lies three aisles, which open up four lanes. This gives them the choice whichever lane they would like to take. Either way, they all lead to a soft right bend, which follows into a meat freezer storage.

Racers then traverse the freezer section, which consists of a very wide 180 degree turn, then leading to the exit of the storage. A sharp left bend follows into another hard right in quick succession. Racers than drive straight ahead to the checkout registers, which once again provide many lanes from their presence. The exit of the grocery store follows soon after, and players will drive on a straight-dipped sidewalk that lies just outside the market. At the end of the sidewalk, there is a right turn back into the entrance of the supermarket, completing the lap.

The meat storage is by far the track's most infamous obstacle. As it is a cold freezer, the surface of the meat locker is very icy and slippery, diminishing the car's traction and causing any vehicle to slide when turning. RWD cars in particular are much more dire in this situation as the power from the rear of their wheels cause them to spin out.

Near the exit of the grocery store, there are two trolleys right after the checkouts. Their heavy weight will cause any unsuspecting players to lose almost all of their speed should one come into contact with one. The exit also is supported through automatic sliding doors, which moves in and out periodically, potentially sliding into the paths of unfortunate racers.

Finally, the entrance of the market follows right immediately after the peak elevation of the sidewalk. Players must be cautious in this section or risk spinning out upon landing, which will make or break the race as it is the final turn of the track.

As mentioned before, RWD configured vehicles such as Aquasonic have issues in the freezer sections, and due to this, they are not recommended for this course. FWD vehicles such as RC on the other hand, do much better as they have an emphasis on grip.

While the freezer section is a challenging obstacle, there are some areas in which the surface is completely dry. They lie on the inside and outside perimeters of the meat locker. Vehicles can cut across to this section in particular the inside corner, saving time and navigating through the hazard with ease. Vehicles can alternatively slow down before undertaking the section for extra control. Furthermore, Oil Slicks or even any havoc in particular are also devious in this section, giving them no chance of recovery due to the friction-less surface.

Finally, players should also take the rightmost lane in both the aisles and checkout registers as these lanes are the closest to the following corner. Following the checkout registers, a Clone Pick Up or Ball Bearing are effective in the sidewalk as it is quite narrow and follows from a blind corner.

The Global Pulse is located on the left end of the sidewalk which follows after the sliding doors.


The Practice mode star is located in the air above the middle register. By hitting the ramp at a fast speed, the vehicle should fly right into the airborne star. A fast or high accelerating car, such as Col. Moss or Sprinter XL respectively, is recommended. 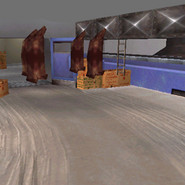 Exiting away from the aisle lanes.

Mouse and others heading for the checkouts and exit.

RC cars exiting the market onto the sidewalk. 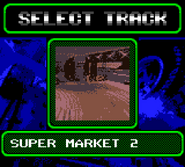 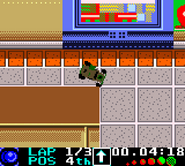 Bertha Ballistics racing in the GBC version of the track.