Sprinter XL is one of the many standard RC cars available in Re-Volt.

Sprinter XL is a 4WD configured Electric-operated car, classified under the Rookie rating.

Sprinter XL, hence its name, accelerates amazingly fast. Clocking in at an exceptional 3.16 m/s², Sprinter XL is known for being the fastest accelerating car in the Rookie rating by a very large margin. Its acceleration stat also rivals RC San's, who is in the Amateur rating. Sprinter XL's high acceleration has many uses. It can prove handy in starting grids, using this stat to pull ahead of the pack within seconds, allowing it to avoid minimal conflict in terms of packed collisions at the start of the race, especially in Simulation mode. In addition, it makes mistakes conducted very forgiving, thanks to its acceleration stat proving to be very valuable in recovery. Finally, it can also be used to navigate inclines very quickly, losing minimal speed upon entering such sections.

Though not as prominent as acceleration, Sprinter XL also possesses other advantages. Its top speed is very respectable in its rating at 31 mph (50 kph). This rivals many competitors, including Phat Slug and Dust Mite. The combination of good top speed and amazing acceleration grants Sprinter XL astounding swiftness. Its cornering ability is not to be underestimated either, due to its narrow turning radius. This enables Sprinter XL the capability of undertaking corners at decent speeds.

However, Sprinter XL is held back due to its weaknesses. Sprinter XL while swift, is also light as a trade-off, weighing at an abysmal 900 grams. This nets the vehicle as the lightest in its rating, as well as the second-lightest car in the game, behind Advanced rating R6 Turbo. This makes Sprinter XL highly susceptible to Pickups, as the car is known to be launched a significant distance away from impacts caused by Fireworks or Water Balloons. This in turn emphasizes on the utility of Sprinter XL's swiftness in order to avoid Pickups, rather than tackling their impacts.

Another one of Sprinter XL's flaws is its grip. While not as infamously bad as those of Pest Control's or Humma's, its traction is below average and is not one of the best. Despite running under a 4WD drivetrain, Sprinter XL exhibits problems under many surfaces, including the freezer section in SuperMarket 2 or any off-road terrain in general. Furthermore, attempting to perform a very sharp turn at high speeds will more often than not cause Sprinter XL to lose control. These issues are most likely caused due to its high acceleration. The vehicle accelerates quickly, due to the very fast spin rate of its tires. This in turn causes a lack of friction on the ground, making the car very vulnerable to spinning out of control if one is not careful.

Overall, Sprinter XL is a car with many highs and lows. It has good speed and turning radius, but the car tends to dominate races utilizing its extravagant acceleration. On the other hand, the car has lacks greatly in terms of weight and its tire grip on the track, causing the car to do spin-outs. Nevertheless, its supreme acceleration is very praiseworthy and a massive positive contribution to its overall performance. However, in order to fully capitalize this advantage, it demands a very high level of skill compared to other vehicles such as RC Bandit or Harvester, requiring absolute track and racing skill from the player. 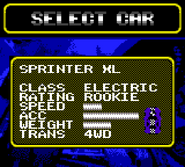 Sprinter XL in the car selection menu of the discontinued GBC port.