Splat (known as JG 2 in the PlayStation version) is a car exclusive to the PlayStation and Dreamcast versions of Re-Volt. It is also available in mobile ports of the game as well as in newer builds of RVGL as optional additional content.

Splat is a Glow-fueled car with an RWD transmission, classified under the Advanced rating. Splat is based on the body platform of NY 54, however parameters are altered between the two, demonstrating different overall performance.

Splat's biggest highlight is its handling characteristics, moving away from its visual counterpart's unpredictable grip issues. Instead, Splat has exceptional grip, in which it is much more difficult for the car to lose control and fishtail. Despite being an RWD car, Splat demonstrates little to no issues on slippery surfaces which is a major improvement over its standard counterpart. There is also an adjustment over turning radius, with Splat possessing a slightly tighter cornering ability, although the turning radius of NY 54's is arguably decent already. These remarkable handling traits make Splat a very simple car to drive.

Unfortunately as a trade-off for good control, Splat is plagued with appalling flaws in terms of swiftness. Its top speed is atrocious, capping off at only 33 mph (53 kph), which is rather at best more suitable for the Amateur rating. Most of the competitors in the Advanced rating reach speeds up to excess of around 35 mph (57 kph) which gives Splat relentless difficulty keeping up when traveling on wide straightaways.

Another major flaw is its dreaded acceleration stat, clocking in at only 1.6 m/s², being slightly lower than the acceleration of its standard counterpart, but nevertheless having the lowest acceleration in its rating. Combined with the low top speed, Splat suffers heavily in maneuverability, climbing inclines at a much slower pace than its competitors.

Overall, Splat is a prime example of a car that offers low risk, but also low reward, being one of the easiest cars to control in the game, yet demonstrates abysmal momentum in terms of speed and acceleration. The aspects are comparable to Groovster, however Groovster has a higher emphasis on performance, while Splat focuses more on control. Nevertheless, the car remains as an excellent choice for beginners, and despite its poor swiftness, the AI places well in races with this car, beating NY 54 under many circumstances. 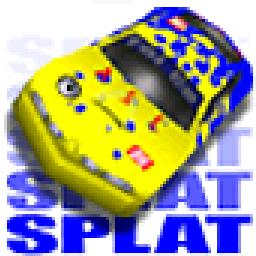