Shocker is a car exclusive to the PlayStation, Dreamcast, and mobile versions of Re-Volt, as well as an optional integration in RVGL.

Shocker is a Glow-fueled car with a RWD transmission, classified under the Advanced rating. The vehicle is based on the body styling of Panga TC, however the two have differentiated parameters.

Shocker retains some of Panga TC's benefits. The vehicle keeps its visual counterpart's turning radius, which is decent for its rating. Grip is identical for both cars, which is also considered acceptable. Shocker also possesses the same weight as well, having a load of 1.8 kilograms, which once again is very reasonable for its rating. While these benefits are not exceedingly astounding, they are satisfactory enough not to cause any major consequences.

However, Shocker is best known for its amazing stability, a major improvement and change from its visual counterpart. The vehicle is equipped with soft suspension, rectifying Panga TC's main flaw; the car no longer flips at high speeds. This to an extent allows Shocker to make full use of the Battery pickup with little risk. The increased stability furthermore blesses Shocker in bumpy terrain, comfortably navigating across it with no noticeable problems.

Unfortunately, as a trade-off, Shocker does not inherit Panga TC's biggest advantage, which is its top speed. The vehicle only reaches a peak speed of 35 mph (56 kph), 2 mph (3 kph) than its visual counterpart. This puts its top speed on the same range as Bertha Ballistics. While its adjusted top speed is certainly not bad, instead being well appreciated for its rating, the change prevents Shocker from being one of the fastest cars in the Advanced rating.

Shocker also has a different acceleration stat than Panga TC, only reaching its top speed by 2.09 m/s², 0.02 m/s² slower than its counterpart. Although the change is minuscule, when combined with the decreased top speed, its mobility is much more noticeable, especially when compared to its counterpart. Both vehicles are also RWD, which proves to be a problem for Shocker in icy, slippery areas such as SuperMarket 2, despite its adequate grip and turning radius.

Overall, Shocker is an easier vehicle to control than Panga TC, having increased stability characteristics in exchange for slightly decreased mobility. Despite the maneuverability nerf, the stats are still appreciated, and Shocker remains as one of the most well-rounded vehicles in its rating. 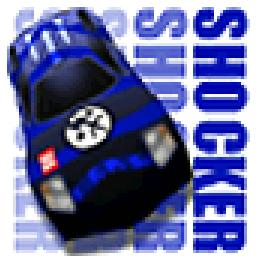