SNW 35 is a car exclusive to the PlayStation version and Dreamcast versions of Re-Volt, and optionally integrated in newer builds of RVGL.

SNW 35 is a Glow-fueled car with a 4WD transmission, classified under the Pro rating. Its body styling is identical to Humma, however SNW 35 possesses differentiated parameters compared to its visual counterpart.

Speed-wise, SNW 35 fits nicely in its rating with a top speed of 40 mph (65 kph), barely surpassing the top speeds of its counterpart. However, the acceleration difference between Humma and SNW 35 is far more drastic than one would assume.

While Humma has an acceleration stat of 3.45 m/s², SNW 35 clocks in at 4.38 m/s², which is quite outstanding given the gap threshold between those cars. As Humma is the second-fastest accelerating vehicle in the game, SNW 35's acceleration stat is unparalleled, essentially giving it the trait of the fastest accelerating car in Re-Volt (excluding the normally unobtainable Probe UFO). The vehicle's superb acceleration nets its favorable qualities, including the ability to go over inclines quickly and with minimal loss of speed, as well as almost instant recovery should one make a mistake. To quickly recap, SNW 35's acceleration qualities are unique in the sense that it is able to perform techniques remarkably that other cars in its rating couldn't do, such as climbing extremely steep hills and roaming in Stunt Arena with ease.

Another major difference in both cars is the grip. Unlike Humma, which had the flaw of possessing extremely slippery friction, the traction in SNW 35 is far more stable and manageable. Its traction can be compared to the likes of Adeon or JG-7, in which the car will slide if the player forces the car to do so, rather than the car sliding unexpectedly.

SNW 35 however, is not without flaws. Despite sharing the same body and platform as Humma, the car only weighs in at a mere 1.5 kilograms, 500 grams lower than its counterpart. While this is an emphasis on the vehicle's maneuverability, its low weight makes the car very vulnerable to attacks from Pickups, influencing on the stability of the vehicle should it come across impact with one. The car also has a slightly wider turning radius than Humma, occasionally forcing SNW 35 to slow down in order to take tight corners.

Despite its flaws, these are not sufficient enough to overshadow the car's glaring advantages. Due to its prowess on speed, grip, and most importantly having the best acceleration in the game, which is by far one of the most important stats in Re-Volt, SNW 35 is noted for being one of the best cars in its rating by a significant margin, proving to be a very challenging competitor in races when controlled by the AI or the player.

Because of the car's massive advantages compared to its flaws, it was at one point deemed 'broken' by the Re-Volt community due to these favorable characteristics, and the car also caused growing concern about the future of online racing, with the car probable to replace Toyeca as the racing standard. However since console exclusive cars are only an optional addition in RVGL, the ability to choose whether to allow SNW 35 to be in the races or not are entirely up to their decisions.[1] 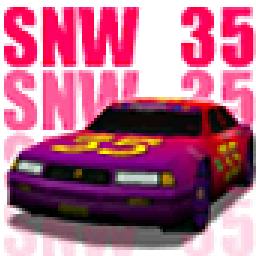 Stats of SNW 35 in the Car Selection Screen.

SNW 35 in the Car Selection Screen in Android.

SNW 35 is in the first place, while Cougar is in the second place, followed by Zipper.

SNW 35 in the PlayStation version. Note the purple wheelbase.