Finish in 1st place for Hard tracks in Single Race

Rotor is one of many selectable standard cars available in Re-Volt.

Rotor is an Electric-operated car with a 4WD drivetrain, classified under the Semi-Pro rating.

Performance-wise, Rotor possesses an excellent top speed. Peaking at an amazing 40 mph (64 kph), Rotor is one of the fastest cars in its rating, only being surpassed by Pest Control and RV Loco. Its high speed enables the vehicle to travel at a fast pace, outrunning many of its competitors especially in straightaways.

Rotor is also known for being a heavyweight. The car weighs in at a massive 3 kilograms, making the vehicle the heaviest in its rating. Like Bertha Ballistics from the Advanced rating which also weighs 3 kilograms, Rotor is fairly resistant to Pickups, taking impacts with ease. Another advantage that Rotor has is its impressive grip, which is further supplemented thanks to its 4WD layout.

The most notable benefit of this vehicle however, is that it has the unique characteristic of being able to drive upside-down, which can come in handy when flipped over by obstacles. Its special ability removes the necessity of manually flipping the vehicle right-side up, saving time.

However, Rotor also possesses many noticeable flaws that undermines its potential. Unlike its top speed, its acceleration is far from fascinating. Clocking in at a disappointing 1.98 m/s², Rotor has the second worst acceleration in its rating, only being better than Pest Control. Its cornering ability is quite pitiful, with the vehicle possessing a wide turning radius. Powersliding is also sub-par, up to the point of being unable to powerslide at all. These flaws impact on its performance in corners; being terrible in acceleration and cornering while having a large body frame is simply poor synergy for Rotor, losing significant speed in inclines, and when taking tight turns, despite its magnificent top speed.

Rotor's most glaring and infamous flaw however, is its horrendous stability. The car is subjected to massive disorientation when traversing uneven terrain, due to the vehicle's stiff suspension and its thick, heavy body frame. Attempting to steer sharply or enter at high speed onto such terrain causes the vehicle to frequently lose control and flip over. This is demonstrated in tracks with dramatic elevation changes such as Botanical Garden or Ghost Town 2, where the vehicle experiences major difficulties.

Overall, Rotor possesses remarkable top speed, traction and immense weight, as well as the unique ability to drive regardless of the orientation of the vehicle. However, its competitiveness in races is compromised due to poor acceleration, a wide turning radius and, most importantly, its atrocious stability. As such, Rotor is most effective in wide, open tracks such as Toys in the Hood 1, Toytanic 1 and Toytanic 2, but is troublesome and demands a higher level of technical skill in areas with bumpy and rough terrain. 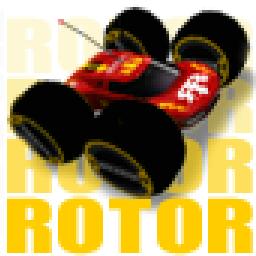 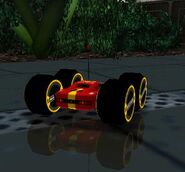