It is also available in RVGL, albeit as optional additional content. It does not replace any tracks in Championship in this version.

This track takes place in an urban city at night where the RC cars jump from building to building in order to complete the laps.

The official public release version has been altered from the original version which was set at daylight. Due to hardware restrictions from that time, it has been decided to set the track at night to achieve a realistically low drawing distance. The first version is found in the source code of the Canned Version of the PC Version of Re-Volt and had a name of Fiddlers on the Roof (1998), made by main designers of game Paul Phippen and Simon Harrison. The actual version received improvements by Jim Vale[1].

Racers start on top of a building with three arches. Another building lies right in front of them, which they must jump across as soon as the race starts. A sharp right occurs in this building, where vehicles then drive over the window panels located on the roof.

After navigating through the panels, racers jump across a building with a capsule-shaped canopy. Vehicles go around the perimeter of this building by making two consecutive 90 degree right turns. At the end of the second building is a jump to the next building, which is a helicopter pad. An actual helicopter hovers above the pad.

On the landing pad, vehicles must make a quick left turn which takes racers out of the spot onto the next building. Another left turn occurs, which is yet another jump. Here on the building consisting of two satellite dishes, there is a soft right turn leading into a inclined walkway. The walkway takes the racers onto the main control room of the dishes, where they must go around the building by making two back-to-back right turns. After making these turns, another inclined walkway is seen, taking the racers to the next building.

The next building is a fairly long straightaway with bumps across the route. Players are then taken to a building with three horizontal pillars, where after passing them there is a sharp 90 degree right turn. A very sharp incline is seen ahead, where it is necessary to climb it. After the incline, there is a straightaway. The first building with the arches is not too far away from there.

Many of the obstacles on this track are formed by ramps and elevations on the roofs, such as the ceiling windows for instance. The multiple scenarios of these ramps is a negative impact for vehicles with poor acceleration and stability, causing them to feel slow and sluggish as they cross the inclines, as well as a possibility of losing control after the jumps. Cars may fall off the rooftops to their doom if they are not careful, forcing an automatic reposition. Cans of paint, stairs and spotlights at the heliport are also present, objects that prove to be an obstacle all around the track.

Due to the countless amount of bumps and jumps, a car with good acceleration or stability is recommended. Vehicles such as Aquasonic or Shocker can navigate across the buildings with little hassles thanks to their multi-purpose utility.

For maximum impact, it is a good idea to place items such as the Clone Pick Up or the Oil Slick on the peak of the buildings' ramps. That way, any vehicles that come across them will lose control onto the next building, hindering their landing. Furthermore, attempt to cut corners when navigating from one building to another, especially the helicopter pad, as this will save time in the long run.

At the very sharp incline near the end, head across the incline to the side rather than ahead, as it is less steep from that section.

The Global Pulse is located in an alley enclosure, just behind the second steel ramp. It is easier to grab in reversed mode as it is readily visible in that direction.

The Practice star is located at the end of the top of the wall surrounding the satellite headquarters. In order to grab the star, players must head towards the second steel ramp at the opposite direction. Instead of entering the ramp though, bear on the right side of the steel ramp. Then, cross the edge of the building at a moderate to slow speed in an attempt to land on the top of the wall. As soon the landing occurs, the vehicle must come to a complete stop in order to prevent falling off the wall after landing. This may take a few attempts and a degree of luck is required.

There, drive carefully around the perimeter of the wall where the star is located at the end. 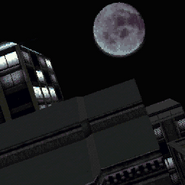 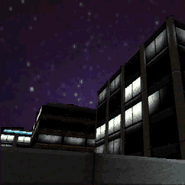 The building that comes after the start grid.

The ramp that connects the second and third buildings' roofs.

The building with window panels and water tanks.

The building with the capsule-shaped canopy.

The building which comes after the pad.

The building with satellite dishes.

Passage to the next building.

Another building with bump obstacles.

Near to the circuit's end.

Unused skybox of Rooftops, from its data folder.

Track zones found in the .taz file which resembles the shape of Fiddlers on the Roof.

Another angle of said track zones. 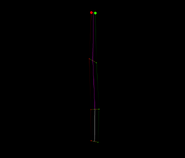 AI Nodes of Fiddlers on the Roof.

Pos Nodes of Fiddlers on the Roof.