Riva TNT2 is a car that is exclusive to the very rare nVidia distribution of the Re-Volt Demo and also present in the files of DEV version of Re-Volt, but not included in the car selection screen of the game version.

Riva TNT2 is the signature car of nVidia corporation, another distribution that has not yet been found. There are two different versions of the car parameters found. The first is the one from the Developer Version (DEV) of Re-Volt, while the second variation was oddly found in the carinfo.txt of PC Team demo, in the place of Aquasonic (its visual counterpart).

While Riva TNT2 in the Dev version has a mammoth top speed of 36 mph (58 kph) and decent acceleration of 2.36 m.s², it also has the worst handling compared to other cars, as it is very difficult to control when it steers left or right, attributed from its abysmal grip.

The PC Team variant however, gives the car optimal control, being actually the same of the other demo cars PC XL8 R, Gamespot and Game Center. It is also noticeably slower than the Dev variant, although it accelerates much faster. Furthermore, the parameter from the PC Team demo is more suitable for Rookies, unlike the Dev version in which the top speed fits better between the Amateur cars. As the same of PC XL8 R, the PC Team parameters rates Riva TNT2 as a Pro car, despite its Rookie-based parameters.

It can be noticed by opening the Gamespot parameters that it was based on Riva TNT2. Due to the similarities between Gamespot and the PC Team variation, it can be said that PC Team's is the true version of the car. However, the reason of the existence of the DEV variant remains unknown.

In summary, the parameters in both variants differ from the following aspects:

Both parameters also have a missing AI section. 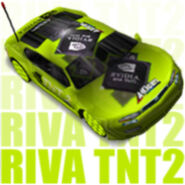 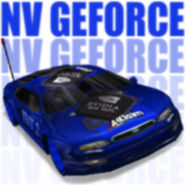 Riva TNT2 at the Frontend.