RVHouse or Re-Volt House is an Open Source multiplayer Game Lobby for Re-Volt. After MSN Gaming Zone shutdown, and GameSpy Arcade became less used and filled with ads, Mr. Arto Jalkanen 'arto' decided to create this program to help new users to play and chat without all the trouble. 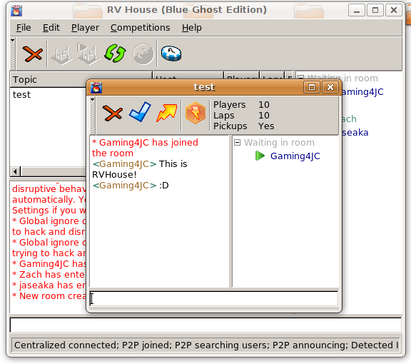 It is now possible to play on versions of Linux, and a tutorial is available at the RVHouse site.[1] RVHouse is popularly used by many in the Re-Volt online community including RVR an online racing team.

Do to the disappearance of speedweek.net, a new version needed to be made with a new domain. It temporarily was working purely in P2P mode. [2] It is now working in centralized mode once again at the new domain below.

This article is a stub. You can help Re-Volt Wiki by expanding it.