RG1 is a car exclusive to the PlayStation version and Dreamcast versions of Re-Volt, as well as an optional integration in newer builds of RVGL. A car of the Semi-Pro rating, and the console exclusive counterpart to Zipper, RG1 appears as a sleek, dark green coupé.

The RG1 is a Glow-fueled car with a 4WD transmission, classified under the Semi-Pro rating. Based on the body styling of Zipper, RG1 possesses similar but slightly different parameters to its standard counterpart.

Both vehicles have roughly identical acceleration and turning radius for its rating, being very well-rounded and suitable for the Semi-Pro rating. While not overly spectacular, both cars can still prove to be a competitor in those fields.

As a trade off unfortunately, RG1 is plagued with an appalling top speed, only reaching 36 mph (57 kph), which secures the car as being the slowest in its rating. Its inferior speed causes issues in long straights, being outclassed by competitors over those sections. Like Zipper, its substandard weight of 1.4 kilograms, may prove troublesome, being vulnerable to Pickups in occasion.

Overall, RG1 handles similarly to Zipper, but trades off top speed for increased grip, making the vehicle more of a low risk, but slightly less rewarding car compared to its counterpart. RG1 also faces fierce competition against JG-7, who possesses a higher top speed and turning radius, but has a lower acceleration and weight than it. 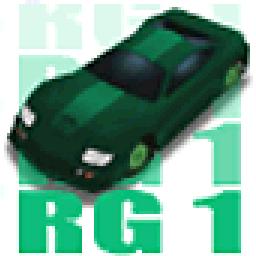 The stats of RG1 in the Car Selection Screen.

RG1 in the PS1 version of the game.