Purp XL is a car exclusive to the PlayStation version and Dreamcast versions of Re-Volt, and optionally integrated in newer builds of RVGL.

Purp XL is a Glow-fueled car with a 4WD transmission, classified under the Pro rating. Based on the body styling of Toyeca, the two share very similar but slightly different parameters.

Like its counterpart, Purp XL has a well-rounded acceleration stat, covering at an remarkable 3.17 m/s², only falling behind the high-accelerating Humma and SNW 35. Purp XL furthermore has proficient grip just like its counterpart, being very stable through turns. Purp XL also weighs in at 2 kilograms, being the modal weight for the Pro rating.

Purp XL only differs from Toyeca in top speed, reaching an exceptional 42 mph (67 kph), being noticeably faster than its standard counterpart. As such, the vehicle is effective at long straightaways, and coupled with its significant acceleration, makes the vehicle swift in races.

However, Purp XL retains the main flaw of its standard counterpart, which is the wide turning radius. The problems of understeer force the car to slow down when making corners, as well as forcing frequent use of powersliding. The vehicle's increased top speed makes the issue more evident, with the car requiring to brake earlier before corners. Furthermore, unlike its counterpart, Purp XL also has an abnormal habit of doing an instant sharp 180 degree turn if its throttle is released for too long while steering in any direction, proving to be a nuiance to the player and limiting its powersliding abilities.

Nevertheless, this flaw is not significant enough to outweigh the car's advantages. Due to Purp XL having very favorable well-rounded stats and its upgrade from Toyeca, the vehicle is considered to be one of the best in the game. Its increased top speed is the vehicle's biggest highlight, controlling many races using this advantage.

Because Purp XL is essentially an improved version of Toyeca, the car caused controversy among the Re-Volt community in terms of the racing standard, potentially replacing the aforementioned car which was well known as the 'de facto' car in online races. Like SNW 35, Purp XL was the focal point of the decision to include console cars in RVGL, causing concerns that these cars would make plenty of other cars outclassed and obsolete. These points eventually lead to these two cars (and all of the console exclusive cars), an optional integration in the game.[1] 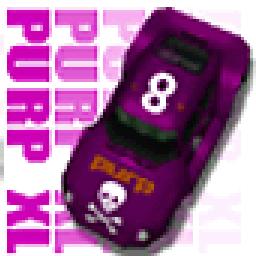