Phat Slug is one of the many available standard cars in Re-Volt.

Phat Slug is a RWD configured Electric-operated car, classified under the Rookie rating.

As per the word 'phat' (a play on the word 'fat'), Phat Slug is large and heavy, which is one of the vehicle's advantages. Phat Slug weighs in at a massive 2.5 kilograms, making the vehicle the heaviest in its rating and narrowly surpassing BigVolt's mass by 200 grams. This grants Phat Slug amazing resistance to Pickups with even the strongest items such as the Clone Pick Up or the Bomb doing very little to it. Its mass is considered an outlier, as most of its competitors weigh around 1.4 kilograms or less.

In terms of other benefits, Phat Slug also possesses great cornering ability. Its front wheels are capable of locking to its desired direction within less in a second, bestowing the vehicle with a commendable turning radius. This allows the vehicle to undertake corners without necessarily slowing down. Along with this, Phat Slug possesses satisfactory top speed, peaking at 31 mph (50 kph), a little under Dust Mite's top speed by the smallest of margins. Phat Slug's stability is also decent, which is accredited to its large shock absorbers and wheelbase.

However, Phat Slug also has disadvantages. Its grip leaves a lot to be desired, with its adhesion on the ground being unpredictable at times. This is mainly due to its RWD configuration. As such, Phat Slug demonstrates occasional problems with traction depending on the surface, not performing too well in the freezer section in SuperMarket 2 or the glass walkway in Museum 2.

As suggested by the word 'slug', Phat Slug's most detrimental flaw is easily its acceleration stat. Clocking in at an atrocious 1.4 m/s², Phat Slug suffers from being the slowest accelerating car in its rating, and to a broader extent, one of the worst in the game. This is highly problematic, as every competitor in the Rookie rating has an acceleration stat that is at least acceptable or better, further isolating Phat Slug's performance from the rest of its rivals. Its poor acceleration stat makes it very difficult for Phat Slug to reach its respectable top speed. This is evident in a number of situations. Firstly, Phat Slug suffers from exiting corners. Despite its good turning radius, the vehicle still loses a noticeable amount of speed when turning corners, forcing the vehicle to rely on its acceleration stat upon finishing corners. In addition, it has issues climbing various inclines such as the escalator in Museum 2. Here, the vehicle loses a significant amount of speed upon entering, while at the same time navigating this section at a slower pace than many of its competitors. These attributes make Phat Slug a very sluggish car under many circumstances.

Overall, Phat Slug is a vehicle of extremes. It is known for being the heaviest car in the Rookie rating, thanks to its immense mass of 2.5 kilograms. The vehicle also has a remarkable turning radius, providing assistance on corners. On the other hand, the car suffers from having one of the worst acceleration stats in the game, in addition to its awkward grip. Due to almost all of its competitors having terrific acceleration stats, its horrific acceleration stat is considered an outlier. This unfortunately is significant enough to outweigh its advantages, ultimately making Phat Slug a very difficult car to win races with. 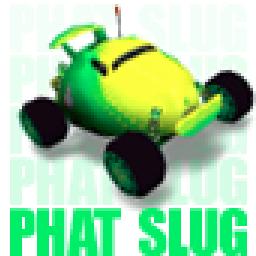 Side view concept art, from the Re-Volt source code. 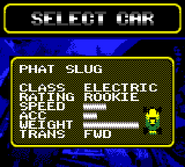 Phat Slug in the car selection menu of the discontinued GBC port.