PC XL8 R is the signature vehicle of the rare distribution of the now-defunct PC Accelerator magazine company. The vehicle's files can also be found buried in the files of the Developer Version of Re-Volt with a missing Parameters.txt file. Despite its parameters are not present in the Developer's version, oddly it can be found in the carinfo.txt of the CGW demo, in the place of Aquasonic (its visual counterpart).

In the parameters found in the Carinfo.txt of v0.01cgw, PC XL8 R was rated under the Pro rating. This is unusual for a car of 32 mph (52 kph). The car was possibly planned as a Rookie car in the PC Accelerator demo, which unfortunately has not been found yet.

The car's body base is taken from Aquasonic's which is in the final version of the game. Despite the rating difference, the car has the same parameters values of the demo cars Gamespot and Game Center. Its top speed and acceleration were slightly decreased to fit in the Rookie rating (as before the parameters were Aquasonic's), but nevertheless a top speed and acceleration of 32 mph (52 kph) and 2.26 m/s² respectively is still very acceptable and a standard fare for its rating.

In addition, the vehicle is also noticeably heavier than Aquasonic, with 1.8 kilograms judged as a very remarkable mass in its rating. Its handling on the other hand is identical to its basis, possessing an excellent turning radius but also has average grip, which becomes problematic especially under off-road surfaces. 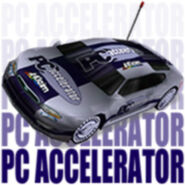 Custom box art made by RV_Passion for the DEV and Demo Pack of the RVL members.