NY 54 is one of many selectable standard cars available in Re-Volt.

NY 54 is a Glow-powered car with a RWD drivetrain, classified under the Advanced rating.

The car tops at a peak speed of 35 mph (57 kph), on-par with BossVolt, and overall is a very appreciable top speed for its rating, performing decently in long straightaways over time. Its weight is also well-rounded, having a mass of 1.6 kilograms, with the car able to take hits nicely but occasionally runs into trouble with stronger Pickups such as the Clone Pick Up or Water Balloons. Another perceptible advantage is its turning radius, with NY 54 having no prevalent understeering issues.

While these advantages seemingly sets NY 54 up as a comprehensive vehicle, it is also aggravated with flaws. One such noticeable disadvantage is its acceleration, with a value of only 1.62 m/s². Compared to its competitors, its acceleration is horrendous, being in the same range as its console exclusive counterpart Splat, and Groovster (another console exclusive car). The poor acceleration becomes troublesome the steeper the incline, with a noticeable amount of speed lost upon entering one.

Its main flaw though, is the vehicle's substandard, yet unpredictable grip. While at times NY 54 is stable when making turns, there are other times in where the friction against the ground decreases, causing the car to lose control. This grip loss is sometimes random, but is most evident when the throttle is released during steering, and when driving on extremely smooth surfaces, including the glass walkway in Museum 2. Being a car on the RWD drivetrain does not help either, further exasperating the issue of its erratic traction. While countersteering is not too difficult, the other problem comes from the terrible acceleration, which makes recovery very sluggish for NY 54 should it lose traction and slide, being surpassed by many racers should this happen frequently. As such, the AI does not perform well in races with this car due to this scenario.

In conclusion, NY 54 possesses sufficient top speed for its rating, as well as having an acceptable turning radius, but is beset with a dreaded acceleration stat, and unpredictable grip, which makes it hard to control effectively at times. 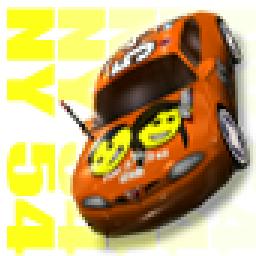 Stats of NY 54 in the Car Selection Screen.

NY 55 in Botanical Garden taken from the Re-Volt Website