Finish in 1st place for Easy tracks in Single Race

Mouse is one of many selectable standard cars in Re-Volt.

Mouse is an Electric-powered car with a 4WD drivetrain, classified under the Amateur rating.

The vehicle is known for being incredibly heavy. It weighs at a massive 2.3 kilograms, which undeniably makes the vehicle the heaviest in its rating. This enables the vehicle to take impacts from Pickups without the fear of being launched meters away upon contact.

Mouse, while being heavy, is also swift as well. It has a decent top speed of 34 mph (54 kph), sharing this speed among other competitors in its rating such as Candy Pebbles and Aquasonic. Unlike those two however, Mouse is known for accelerating at that speed at a whopping 2.86 m/s². This acceleration stat only loses to RC San, but nevertheless is still astoundingly impressive given the fact that Mouse is a very large car.

Its handling characteristics are acceptable. Turning radius is fair, but occasionally Mouse will be forced to slow down in the tightest of corners mainly due to its large size. Its grip is also satisfactory, being controllable and less prone to spinning out.

Mouse however, has the noticeable weakness of being very unstable. The vehicle has an extremely high frequency of staying flipped when it happens, increasing the usage of requiring the player to manually flip the vehicle back up, wasting precious time in the most crucial moments. The vehicle is also very vulnerable to obstructions, mainly due to its wheels sticking out of its body frame. It also has a higher tendency to flip when steering under the effects of the Battery, coercing Mouse to slow down before taking corners. This diminishes the full effect of the Battery, since the vehicle is unable to turn at high speeds which is given from the power of the Battery.

Overall, Mouse is a decent car, boasting good speed, and insane acceleration and weight stats, but is plagued with a horrendous stability stat that is very similar to Genghis Kar's. As a result, the vehicle demands a high level of technical skill, forcing the user to keep a close eye on its stability while turning and on bumpy terrain. Unlike Genghis Kar however, Mouse is capable of demonstrating very high potential in return if its instabilities are able to be controlled, thanks to the vehicle's remarkable swiftness and decent handling traits. 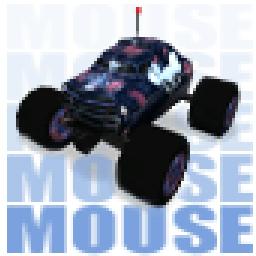 Stats for Mouse in the Car Selection Screen.

Paul Phippen's concept art of "Chubba" (as Mouse was called in The Re-Volt 1999 Scrapbook Deluxe). 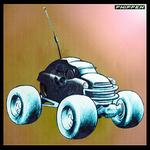 The concept art from the game's gallery.

Mouse in the car selection menu of the discontinued GBC port.