Loaded Chique was the first version of NY 54. It is avaliable only in Re-Volt DEV, and is aimed at the sponsorship of Iguana London. The name "Loaded Chique" also appears in the carinfo.txt of most of the Demos, confirming even more it was planned to be in the place of NY 54.

Overall, Loaded Chique is a complete copy of NY 54 in body styling and looks. Parameters also seems to be the same, therefore the only significant difference is the texture file itself.

Said that Loaded Chique shares the same performance as NY 54, it contains the same descent top speed and heavy feel on its acceleration. Loaded Chique's drivetrain is displayed as a Front-wheel Drive in DEV, but it is actually Rear-wheel Drive, as the same of NY 54. 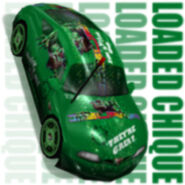 Box of Loaded Chique in DEV version. Stats seems to be broken in this version.

Loaded Chique in a sidewalk of Toys in the Hood 1.

Alternative version of Loaded Chique, probably the original one. Picture probably taken from a Re-Volt prototype version for N64).