LA 54 is a car exclusive to the PlayStation, Dreamcast and mobile versions of Re-Volt. It has also become an optional integration for RVGL in 2016.

LA 54 is an Electric-operated car with a 4WD drivetrain, classified under the Amateur rating. Based on the body styling of Sprinter XL, the two vehicles share similar, but slightly different parameters.

Similarly to Sprinter XL, the vehicle's biggest highlight is undoubtedly its acceleration stat. Covering in at an exceptional 2.48 m/s², LA 54 is the third-fastest accelerating car in its rating, only falling behind Mouse and RC San. Its high acceleration allows the vehicle to pull out of the starting grid nicely, which in turn provides a nice getaway from the havoc of the crowded vehicles colliding against each other. Its acceleration can also be used to recover, should the player hit an obstruction or make a mistake. While its acceleration stat is slightly lower than its standard counterpart, it nevertheless is a valuable contribution to the vehicle's performance.

The vehicle's biggest difference however, is its grip. Unlike Sprinter XL, who suffers from abysmal traction due to its wheelspin caused by high acceleration, LA 54's grip is instead decent. The vehicle is very stable around corners and bearable even at the most slippery of surfaces, lowering the risk of losing control at these sections drastically. Its handling characteristics are further supplemented thanks to the vehicle's turning radius, which is also magnificent. All in all, LA 54 is a very lenient vehicle to control, which is a much needed improvement from its Rookie counterpart.

Unfortunately, LA 54 retains some of Sprinter XL's other flaws. Peaking at a top speed of only 32 mph (51 kph), LA 54's speed is very unremarkable; its top speed only surpasses RC. This makes straightaways and wide tracks a nightmare for the vehicle, being easily overtaken by its competitors in those sections. This pressures the vehicle to rely on sections with sudden and tight corners in order to secure wins.

LA 54 is also fairly light. While slightly heavier than Sprinter XL, the vehicle only weighs in at 1.2 kilograms, its weight only surpassing RC San. This makes the vehicle vulnerable to many Pickups, easily being launched meters away upon contact from items such as Fireworks or Water Balloons. This disadvantage forces the car to be very cautious on its surroundings, with an emphasis on its handling characteristics to avoid any incoming carnage that may be caused by such items.

Overall, LA 54 follows the trend of its counterpart by retaining some of the vehicle's benefits, and is praised for the improved grip. However, the vehicle's viability is impacted due to having a low top speed and weight. Regardless, these flaws are not overly problematic for the vehicle, and LA 54 is shown to be a formidable competitor in its rating, accredited mainly due to its fantastic performance in acceleration and handling, and its ease of use. 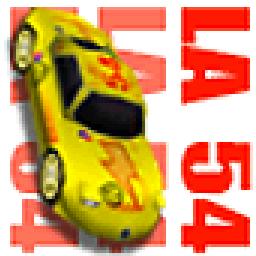 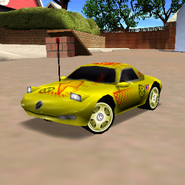 LA 54 with Genghis Kar at its back.