IGN PC is a car that exclusive to the IGN Entertainment distribution of the Re-Volt Demo.

IGN PC is the signature vehicle for the demo distribution from IGN Entertainment. This distribution, along with Acclaim's and Gamespot's, were the fourth generation of known demo engines that were released, which followed before the Developer's version of Re-Volt.

IGN PC's car has a body base of Humma, which first appeared as the car Acclaim in the company's respective demo.

Unlike the demo cars of CGW and PC Gamer, which appeared as the first generation of known demos, IGN PC is noticeably faster than those cars, with its parameters instead being identical to the Acclaim demo car. Its top speed of 31 mph (50 kph) is very appreciated in its rating, although its acceleration of 1.94 m/s² is very middling and sluggish at times.

In terms of handling, IGN PC possesses an excellent turning radius but is held back by its poor grip, just like Humma in the final version of the game. The consequences are less severe due to the slow pace of the Rookie rating. 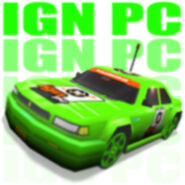 IGN PC traversing the streets of Toys in the Hood 1.