Harvester is one of many available standard cars in Re-Volt.

Harvester is an Electric-operated car configured under the 4WD drivetrain, classified under the Rookie rating.

Harvester's strongest advantage is undeniably its spectacular handling characteristics, making it one of the easiest cars to control. Its traction is very lenient, gripping well under many different types of surfaces. This is further improved thanks to the vehicle's 4WD drivetrain. The vehicle's cornering ability is known to be among the best in its rating. Harvester's turning radius is also one of the tightest. Its wheels are able to lock quickly in a specific direction. This makes the vehicle capable of undertaking corners very easily. In fact, its turning radius is extremely outstanding that it enables Harvester to drive through the tightest corners under full throttle.

The acceleration stat of Harvester is not to be underestimated either. While not as prominent as the vehicle's handling aspects, the vehicle still clocks in at a respectable 2.28 m/s², only surpassed by Dr. Grudge, BigVolt, and Sprinter XL. Its acceleration is sufficient enough to prove handy under many circumstances, such as recovering from mistakes. The synergy of the vehicle's exceptional handling and its credible acceleration stat makes it effortless in avoiding obstacles and havoc caused by Pickups. Its weight of 1.7 kilograms is also remarkable, showing very little consequences should Harvester choose to take a direct hit from Pickups instead of maneuvering away from it.

However, Harvester's biggest and only flaw is its peak speed. The vehicle has a very poor top speed of 29 mph (47 kph). While some players may consider this a supplement to its remarkable control, it nevertheless nets the vehicle as the slowest in its rating and thus the slowest in the game. The issues of Harvester driving on straightaways is conspicuous; it is very easy for vehicles such as Col. Moss or Dr. Grudge to catch up and overtake it, as well for many of the competitors to leave behind the car in races if one is not careful.

Overall, Harvester is a beginner-friendly car, requiring very little skill to use, as it possesses the best handling characteristics in its rating. This allows the vehicle to turn and maneuver around through many corners and angles effortlessly. Its acceleration and weight stats are also formidable, proving to be a valuable contribution in terms of recovery and resistance respectively. However, the vehicle is beset due to its horrendous top speed. As a result, Harvester demonstrates great potential, proving to be very effective in tracks with many tight corners such as SuperMarket 1 or Toy World 2, but is quite shunned and unsuitable in open tracks such as Toys in the Hood 1. 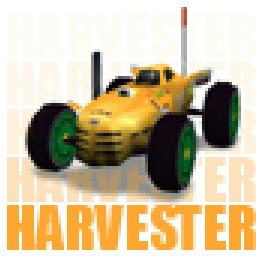 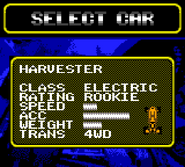 Harvester in the car selection menu of the discontinued GBC port.