Groovster is a car exclusive to the PlayStation, Dreamcast, and mobile versions of Re-Volt, as well as in RVGL as optional additional content.

Groovster is a Glow-fueled car with a RWD transmission, classified under the Advanced rating. The vehicle is based on the body platform of Pest Control, however, the two share different parameters.

Groovster is best known for its fair grip. Unlike Pest Control, that possesses terrible traction causing it to lose control frequently when steering, Groovster's adhesion on the ground is much more tolerable, with the car being bearable when making turns. The car also has a tighter turning radius than its visual counterpart, lowering the risk of colliding due to understeer.

Another one of Groovster's strengths is its weight. The vehicle possesses a mass of 2 kilograms, an exceptional weight for the Advanced rating. Its weight is shown to tolerate carnage from Pickups, showing a considerable amount of resistance upon being hit.

However, Groovster inhibits disadvantages, some of which are similar to its visual counterpart Pest Control. Covering at 1.65 m/s², its acceleration is unsatisfactory for its rating. This issue becomes prevalent especially on slopes, where it loses a significant amount of speed upon entering one. Its swiftness is further exacerbated with a middling top speed of only 34 mph (55 kph), much different from Pest Control's outstanding top speed. The mediocre top speed, becomes a problem in areas with flat straightaways. Despite its grip and turning radius being acceptable, Groovster is coupled with a RWD drivetrain, meaning it still has poor control of icy, slippery areas such as SuperMarket 2.

Overall, Groovster is definitely an improvement over its visual counterpart in terms of handling, with the changes making the car quite easy to control with little risk, being a good choice for beginners. However as a trade-off, the car is noticeably sluggish, which makes it troublesome for players to pull ahead in races. These aspects are roughly shared with Splat, however between these two cars, Splat has an higher emphasis on control, while Groovster is a focus on performance. 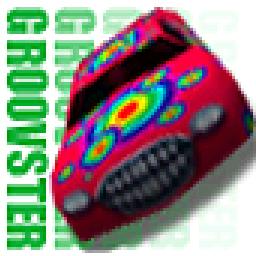