Ghost Town 2 (also known as West World 2) is a standard track created by Acclaim Studios London. It is the penultimate track in game and the second track in the Platinum Cup Championship. Like Ghost Town 1, this track takes place in a Western town.

Both Ghost Town levels happen in the same town. The only difference between the two is the racing line going to different parts of the town. This version features an entry for an abandoned mine, which is the track's most notable landmark.

The start line is situated in the heart of the town, right after the 180 degree turn around the gallows as seen in Ghost Town 1. The path to Bargly's Bank is now closed, and this time racers instead take a right turn, which is now open in this track. This leads into a small empty shed. The entrance is an incline, causing the vehicles to fly right into it. Immediately after exiting the house leads players to its sidewalk, where vehicles will drop off from there and head for a path that lies just ahead of them, leading to the abandoned mine. The passageway consists of a soft left turn.

After the passageway, a sharp right must be taken in order to enter the mine. Here, there is a moderate left turn which gradually decreases in elevation. The incline on the bend stops at the same time the bend finishes, leading into a long straightway across the tunnel of the mine. Eventually at the end of the mine is a very small elusive enclosure where racers must bear left to enter it. A soft right occurs inside the enclosure, leading into a saloon.

A 90 degree left turn occurs as soon racers exit the saloon. Here, players will realize that they have ended in a stretch of land that was used as the starting line of Ghost Town 1. From there, players must head back to the starting line through the exact same racing line as in the Medium counterpart. This involves heading towards the narrow alley that lies beside the 'Voltstone' building, then driving around the perimeter of the gallows at the central area. As mentioned at the beginning of the course layout, the starting line is right after the gallows turn.

Half of the racing line comes from Ghost Town 1, acquiring the same hazards in this section. These include the existing barrels and crates around the gallows, and the inconvenient inclines on the sidesteps of various buildings. However, the addition of the mine section makes the track quite more complex as the mine is also littered with barrels and crates.

The first house which has a ramp at the entrance proves to be an obstacle, causing the cars to collide against the walls of the building, if one is not careful. Furthermore, there is a large pothole after the house, causing any car that drives over it to lose speed or flip over, wasting time.

The bend inside the mine can also be quite tricky, due to its combination of the slope and the bumpy dirt terrain. Driving too fast around the corner may cause the vehicle to spin out of control, especially if its grip is sub-par. The narrow enclosure after the mine is also dangerous as well, as it is a hotspot for Pickups.

On a track with an even mix of bends and straights, an all-around car is recommended. Vehicles to consider are Zipper or Toyeca as they are well-balanced across the board.

As with Ghost Town 1, the path around the gallows is shared, allowing vehicles with the Electro Pulse to zap any oncoming racers that have completed the gallows turn. This allows the attacking player to catch up.

It is recommended that a player slow down if they are not confident, especially with the slope in the mine. Losing control there can cost a lot of time, making it difficult to catch up to opposing racers afterwards.

Finally, the narrow enclosure right before the saloon is an excellent place to deploy items such as the Oil Slick or Ball Bearing as they will guarantee hits from trailing vehicles. The narrow alley just before the central area of the town is also another decent spot to place those items.

The Global Pulse is one of the most deceiving-looking stars to pick up. Although it is located right beside the mine cart that lies right outside to the entrance of the mining tunnel, it is obstructed by railings. Vehicles must maneuver around the railings to reach the cart.

The Practice star is located on the top of a wall closing the fork of the balcony and the incline, which was used in the final section of Ghost Town 1. The star is grabbed by colliding against the wall at a high speed. 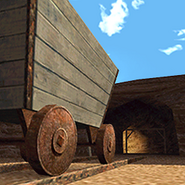 Entrance of the small shed.

Inside the small shed.

Sidewalk from the other side, and the ground with components of a train rail.

Entrance of the mine.

Obstacles inside the mine.

Exit of the mine.

The turn around the gallows that must be performed before the player finishes a lap. 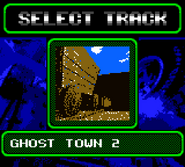