Ghost Town 1 (also known as Wild West 1) is a standard track created by Acclaim Studios London. It is the seventh track in the game after Rooftops and Toy World 1 and the third track in the Silver Cup Championship. As the name implies, it sets the racers in a abandoned Western town. Wooden buildings such as general stores, guns shop, banks, hotels and saloons can be seen in the place. The road is dirty and bumpy in most places, and inside buildings the floor is wooden.

The Ghost Town series of tracks occur in the same town. The only difference between the two is the racing line traveling to different parts of the town.

The racers start in front of the town marshal's hall building, named 'Voltstone'. Player must make an immediate left turn when the race starts and head for a narrow alley that leads to the heart of the town. Afterwards, the racers head towards the gallows, entering from the left, and must circle around it before coming back.

Instead of returning back into the alley however, a hard left occurs after heading back, leading into the town's bank titled 'Bargly's Bank'. Entering into the bank will lead to a very sharp right turn instantaneously after the exit of the bank. Alternatively, racers may choose to go around the bank, forgoing distance in return for entrance at a high speed in the track's next section.

Vehicles then travel in a long but narrow straightway under the shelter of a large building. The straight eventually leads into a steep incline. A sharp right follows right immediately after the peak of the jump. From there, racers have the option to travel back onto the dirt path or continue on the balcony. On the first route, racers drive from a downwards incline which compensates for the upward slope just earlier. A 90 degree right then follows, leading to the long stretch back to the starting line. For the second route, racers must take the right turn earlier to continue on the balcony, which is also heading towards the start line. There is no downhill slope in this section however, forcing vehicles to drop-off when the balcony roof ends, completing the lap.

The Ghost Town features bumpy and off-road terrain spreading the entire track. In contrast to previous tracks which is formed with flat terrain with almost no change in surface properties, the track is considered to be the first off-road themed track in game. Vehicles with poor stability such as Mouse may experience difficulty with this track. Many sections of the track are also narrow, such as the entrance to the shelter or the alleyway at the start of the race, emphasizing the use of caution.

Throughout the track are multiple boxes, planks and barrels. These in particular can obstruct the racing line of many players, wasting time. One such example are the barrels and crates that are positioned underneath the gallows. The bank in particular also has a chair, which also proves to be an obstacle.

Finally, regardless whichever route the player takes, both options are a dramatic elevation change into ground level. The landing onto the dirt road may cause some vehicles to lose control, which can be very detrimental to the race as it is positioned right near the start line.

As with many narrow sections, trap items such as the Clone Pick Up or Oil Slick are effective as they can guarantee hits. Placing them at the shelter, the alleyway or even the balcony are some examples of strategic approaches.

The path used to go around the gallows is shared, which allows players who are approaching the noose structure to attack opponents who have already completed it. Weapons such as the Electro Blast or Shockwave can interfere with them, allowing the offensive player to catch up to them.

As for the most optimal racing line, players can go right under the gallows instead of traveling the perimeter around it. They do however, risk hitting the barrels under it. Next, racers should drive onto the bank as its small distance outweighs the advantage of a higher speed of entry for the other route, especially with cars who are adept at acceleration such as RC San. Near the end, it its recommended to continue onto the balcony as the racing line is fairly clear there.

It is also recommended to slow down just before the incline after the shelter for maximum control. Avoid traveling on the sidesteps of the buildings, especially at the heart of the mining town, as the inclines waste more time than usual.

The star is located on the sidesteps of 'Baynes Hotel'. It can be easily seen after making the 180 degree turn around the gallows.


In the PlayStation version, the star is instead located on the sidewalk of the general store, on the route that surrounds the bank.


The Practice Star is on the top of a box, just beside the ramp that lies a few meters behind the start line. The player must drop off at the correct position, speed, and angle in order to land on the box. Some degree of luck is required. 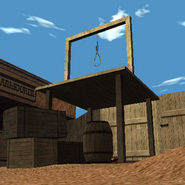 Start grid, with Voltstone building ahead.

The heart (center) of the town, with the gallows at the background.

Front of the bank, with Mouse going through the alternative route.

Narrow path near to the end. 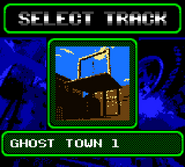