Collect all stars for Easy tracks in Practice

Genghis Kar is one of several standard cars available in Re-Volt.

Genghis Kar is an Electric-powered car under the 4WD drivetrain, classified under the Amateur rating.

Genghis Kar is an extremely fast car. It has an outstanding top speed of 35 mph (56 kph), making the car the fastest in its rating and being on the same range as many cars in the Advanced rating. Its top speed easily allows it to travel along straightaways at an exceptional pace, overtaking many of its competitors in wide open tracks such as Toys in the Hood 1.

Another advantage of Genghis Kar is its impressive weight. Its mass of 2 kilograms nets the car as being one of the heaviest cars in its rating, with only Mouse having a higher mass. With that said, Genghis Kar is able to take many impacts from Pickups with ease, as the vehicle is quite resistant against the strongest weapons, such as the Clone Pick Up. Genghis Kar's traction on the road is very formidable, having amazing grip regardless of its speed, which further makes it more simple traversing in many tracks at a high pace.

However, Genghis Kar is plagued with many noticeable flaws that heavily impact on its advantages. Clocking in at only 1.65 m/s², its acceleration is the worst in its rating. This makes it rather difficult to reach the car's amazing top speed in the first place. Its acceleration also proves problematic in areas with slanted ramps, which causes Genghis Kar to traverse those areas at a very low pace than vehicles which exceptional acceleration, such as RC San.

Its cornering ability is also unremarkable. Genghis Kar's steering rate is rather slow, taking a while for its front wheels to fully lock in a given direction. This causes the vehicle to have a wide turning radius. The vehicle is also known to lose a significant amount of speed when its wheels are turned all the way, and when combined with its abysmal acceleration stat, makes corners and bends a massive ordeal for Genghis Kar.

Genghis Kar's most infamous weakness however, is easily its stability problems, a flaw that is shared with Mouse. Despite running under a 4WD drivetrain, the vehicle suffers from uneven terrain. It is very prone to flipping over if the vehicle continuously drives over bumps, made worse due to the vehicle's high speed. Furthermore, Genghis Kar also flips when steering under the effects of the Battery, leaving the vehicle no choice but to slow down on curves, which undermines its utility on Battery usage and further exacerbates its performance on corners.

Overall, Genghis Kar boasts amazing top speed and weight, but is immensely hindered from its disappointing turning radius, and its atrocious acceleration and stability. These shortfalls unfortunately are prevalent enough to overpower its advantages, causing Genghis Kar to demonstrate major difficulties in numerous tracks, with the AI frequently finishing last with this vehicle. 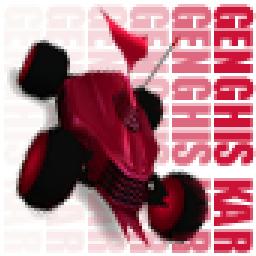 The Blackhorse Emblem seen on the sides of the car. 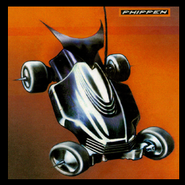 Concept art with message to "Jim" explaining how to design the car.

Another concept of Genghis car showing back side. 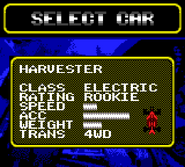