Gamespot is a car that is exclusive to the GameSpot distribution of the Re-Volt Demo.

Gamespot is the signature vehicle for the demo distribution from the video game journalist of the same name. This distribution, along with Acclaim's and IGN's, were the fourth generation of known demo engines that were released, which followed before the Developer's version of Re-Volt.

As the car's body base is taken from Aquasonic's which is in the final version of the game, Gamespot possesses very well-rounded stats. The vehicle's performance is identical to PC XL8 R and Game Center, which are other demo cars. Its top speed and acceleration were slightly decreased to fit in the Rookie rating (as before the parameters were Aquasonic's), but nevertheless a top speed and acceleration of 32 mph (52 kph) and 2.26 m/s² respectively is still very acceptable and a standard fare for its rating.

In addition, the vehicle is also noticeably heavier than Aquasonic, with 1.8 kilograms judged as a very remarkable mass in its rating. Its handling on the other hand is identical to its basis, possessing an excellent turning radius but also has average grip, which becomes problematic especially under off-road surfaces. 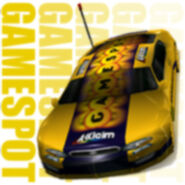 Gamespot parked alongside a curb in Toys in the Hood 1. 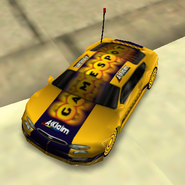