Beat the Challenge times for Extreme tracks in Time Trial
Fulon X is a car exclusive to the PlayStation, Dreamcast and mobile versions of Re-Volt, and integrated in newer builds of RVGL as optional additional content. In those versions, it is also the final car in the Car Selection Screen.

The Fulon X is a Glow-fueled car with a RWD transmission, classified under the Pro rating. While being based on AMW, the two share different parameters.

Fulon X posesses a good turning radius. Unlike AMW, which has an extremely poor turning radius resulting in the infamous 'rail-like handling', Fulon X is much more manageable, being able to take corners without frequently stopping allowing it to pass by such corners at an acceptable speed.

Unfortunately, its advantages stop here, and Fulon X is beset with major glaring weaknesses that undermines its potential. It has an underwhelming overall top speed, reaching at 38 mph (62 kph). While not far behind from other cars that are faster than it, Fulon X remains as being the slowest car in the Pro rating.

At first, while this issue looks minimal in consequences, its dreadful acceleration inflates the severity of the car's swiftness. While also having a substandard top speed, Fulon X only has an acceleration stat of 2.04 m/s², also having the lowest acceleration in its rating. This is awful considering that cars such as Cougar possesses higher top speed and acceleration by a significant margin.

Being the console exclusive counterpart of AMW, weight proves to be a substantial issue for Fulon X, weighting at only 1.2 kilograms, slightly heavier than AMW but nevertheless very light. The lightweight nature of the car causes extreme disorientation from the impact of Pickups showing very little to no resistance at all when under impact. The low weight also proves to be an outlier, with the rating having a mode of 2 kilograms, almost double the vehicle's weight, further isolating the vehicle's performance in relation to the Pro rating.

Its biggest flaw is the vehicle's grip, and stability in general. Having a light body frame as well as firm suspension, gives the car no justice especially when landing from a large height (such as the drop-offs in Toy World 1), frequently losing control after landing. Having an RWD drivetrain, its grip also proves to be a major problem, losing friction against the ground, most often when the car collides with a wall or another competitor. The grip issues are not overly present in AMW, due to its 'rail-like' handling.

In summary, Fulon X is a change in AMW's infamous handling, possessing a better turning radius, but by doing so brings up unfavorable disadvantages, including poor stability and maneuverability. The car is outclassed by many competitors in every single field, and Fulon X's poor performance overall infamously highlights the vehicle as being one of the worst cars in its class. 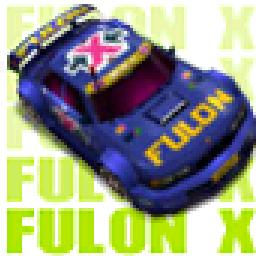 Fulon X in Toys in the Hood 2.

Side view of Fulon X in the car selection screen of the iOS version.