Evil Weasel is one of many selectable standard cars available in Re-Volt.

Evil Weasel is an Electric-powered buggy with a 4WD drivetrain, classified under the Advanced rating. The vehicle possesses good top speed, reaching at 36 mph (58 kph), which fares well in its rating. Being a buggy, Evil Weasel has good traction on the ground, being very stable when cornering.

The vehicle however, possesses some flaws that limit its maneuverability. Gathering momentum at a coverage of only 1.95 m/s², Evil Weasel's acceleration is middling, only surpassing NY 54, Splat, and Groovster. The buggy's small lag on acceleration causes it to experience some difficulties climbing on uneven terrain. As a buggy, this impacts its off-road status.

Adding to the problem of maneuverability, Evil Weasel also suffers from a lackluster turning radius. Although certainly better than turning radius of Pole Poz, Evil Weasel's turning radius is wide enough that it will be forced to slow down slightly in corners in most circumstances. Its weight is dubious at times, only being heavier than R6 Turbo, occasionally becoming disoriented through Pickups.

Overall, Evil Weasel has a good top speed and grip, but its potential is vexed with mediocre aspects of acceleration, weight, and cornering ability. 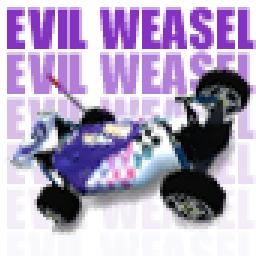 The possible Evil Weasel's first concept. Art by Paul Phippen from his website (also present in the game's gallery).

Zebra.lwo as viewed in Lightwave 3D.

Another angle of the model. 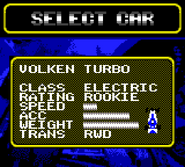