" Evil Toyeca
The baddest car ever. "
—Text file from the Xbox source code.

Evil Toyeca is a car that is not present in any version of the game. It was found with the other evil cars in the leaked Source Code, more precisely together with the Xbox version source files.

Evil Toyeca, as well as the other evil cars, have a nebulous past and the purpose of its creation is currently unknown. The guess is it would be included in a supposed pack of contents that could be acquired only in the Xbox version of the game. However, how the pack would be is as mysterious as the history of its content.

Overall, Evil Toyeca is a complete copy of Toyeca in terms of body style and looks. Even its paint job is similar, except that it has different color tones.

As expected being an "evil car", Evil Phat and Evil Candy have a great difference of speed comparing to their counterparts. Evil Toyeca, however, is the only evil car that fits well to its rating, which sounds ironic since the car is the evil version of one of the best cars in Re-Volt. Evil Toyeca is only 4 mph faster than its counterpart, and 2 mph faster than Purp XL. Furthermore, the car shares almost the same top speed of Evil Candy, slower by millimetric differences.

Despite having the same top speed of Evil Candy, Evil Toyeca possesses a much better acceleration. The car clocks at 3.19 m/s², taking 6 seconds to fully reach the estimated top speed. As another quality of the car, it shares the same heavenly stability and handling of its counterpart, being one of the best choices for a race, and even becoming the newest competitor of Toyeca and Purp XL in terms of performance. 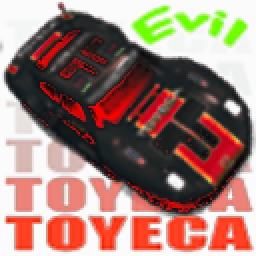