Evil Phat is a car that is not present in any version of the game. It was found with the other evil cars in the leaked Source Code, more precisely together with the Xbox version source files.

Evil Phat, as well as the other evil cars, have a nebulous past and the purpose of its creation is currently unknown. The guess is it would be included in a supposed pack of contents that could be acquired only in the Xbox version of the game. However, how the pack would be is as mysterious as the history of its content.

Overall, Evil Phat is a complete copy of Phat Slug in terms of body style and looks. Even its paint job is similar, except that it has different color tones.

The main differences between both cars are in their Parameters. As an evil version of Phat Slug, Evil Phat possesses an excessive top speed of 40 mph (64 kph), being able to take the lead in few seconds after the race start. By far is the fastest car in the rookie rating. This may turn races with Evil Phat dull for the player who controls the car and unfair for the other competitors. Races with Evil Phat would be more competitive if the car was set in the Advanced or Semi-Pro ratings.

As good as its top speed, Evil Phat is also provided with a descent acceleration, clocked at 1.39 m/s², less than 13 seconds to reach its full speed. Compared to its counterpart, Evil Phat has a much less heavy feel on its throttle, thanks to its high speed.

Despite all the differences in top speed and acceleration, Evil Phat maintains the same body mass as its counterpart: 2.5 kg heavy. Evil Phat also seems to have a firm steering, even in high speeds. 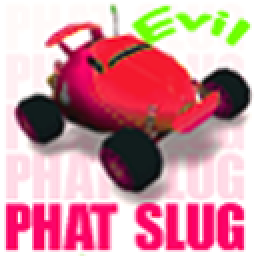