Evil Candy is a car that is not present in any version of the game. It was found with the other evil cars in the leaked Source Code, more precisely together with the Xbox version source files.

Evil Candy, as well as the other evil cars, have a nebulous past and the purpose of its creation is currently unknown. The guess is it would be included in a supposed pack of contents that could be acquired only in the Xbox version of the game. However, how the pack would be is as mysterious as the history of its content.

Overall, Evil Candy is a complete copy of Candy Pebbles in terms of body style and looks. Even its paint job is similar, except that it has different color tones. From the evil cars, Evil Candy has wrong black tone on its bitmap, making some parts transparent and wheels to be like cones.

With Evil Phat dominating its rating, Evil Candy does the same. Able to reach 44 mph (72 kph), the car is the fastest in its rating, turning races with the car unfair for the amateurs. Evil Candy can take the lead with ease, being able to beat even cars from the Semi-Pro rating.

Evil Candy also possesses a descent acceleration of 1.83 m/s², taking around 10 seconds to get its full speed. It's not the best time clocked but the top speed compensates it very well.

The car's handling, however, is not as stable as its counterpart. Evil Candy steering is not so easy to handle, specially in high speed. The car does very well at immediate curving in the tracks, but may oscillate in small angle corrections at straight lines or bigger curves.

The car shares the same body mass of its counterpart, weighing 1.3 kg. 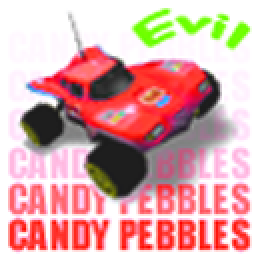