Dr. Grudge (also known by its full name Doctor Grudge), is one of many standard cars available in Re-Volt.

Dr. Grudge is a car classified under the Rookie rating. It is Electric-powered, and is configured under the 4WD drivetrain.

Many of Dr. Grudge's stats are either above average or well-balanced, which is one the vehicle's biggest and game-changing advantages. Its top speed of 31 mph (51 kph) is very remarkable for its rating, being on-par with the all-around RC Bandit, and only surpassed by Col. Moss and BigVolt. Its acceleration is not to be belittled either, clocking in at 2.52 m/s². This ranks the vehicle as the second-fastest accelerating car in its rating, only behind Sprinter XL. This allows Dr. Grudge to recover quickly from obstacles or mistakes induced by players. The synergy of these two stats provide Dr. Grudge formidable agility, being very quick under many situations.

Its cornering abilities are magnificent as well, and is among one of the best in its rating. Dr. Grudge's turning radius is very narrow, with its wheels full-locking in the desired direction relatively quickly. This allows the vehicle to steer at a steep degree even at the tightest corners. This further improves its swiftness, providing Dr. Grudge with the capability of successfully undertaking many corners at full speed.

Although Dr. Grudge possesses a multitude of excellent stats, its grip on the other hand is rather mediocre. Despite running under the 4WD drivetrain, Dr. Grudge has a high tendency to slide when it turns suddenly at a high speed. This is evident from the fact that all four of its wheels create skid marks when steering, indicating the possible event of spinning out of control. This issue is similar to Advanced rating Bertha Ballistics, where careless driving on corners will cause the vehicle to oversteer, thereby losing precious time.

Nevertheless, to be blessed with the third-fastest speed and second-fastest acceleration, as well as an excellent turning radius, is immensely beneficial to its overall performance. It bestows Dr. Grudge exceptional swiftness, as the combination of these two remarkable stats allows it to perform well in many sections, frequently overtaking its competitors on both straightaways and corners. Although its grip is loose, necessitating the use of caution, it gives the vehicle amazing powersliding abilities which further supplements its mobility. Ultimately, Dr. Grudge's advantages massively outweigh its grip issues, and as its folder name 'beatall' states, Dr. Grudge is considered to be one of the best cars in its rating thanks to its exceptional stats across the board, proving to be a potent competitor when driven by the AI or the player. 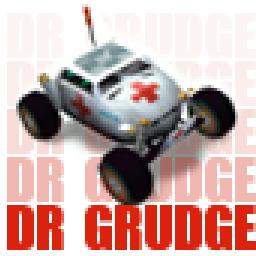 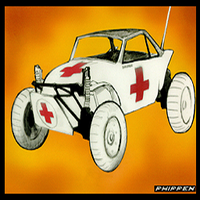 Poster from the game's gallery. 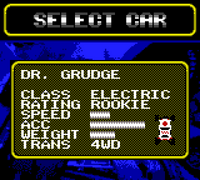 Dr. Grudge in the car selection menu of the discontinued GBC port.