The Council State was one of the ideas Simon Harrison had for Re-Volt. The main theme is centered in the rooftops and internal parts of an inner city building block. According to Paul Phippen, a "Ken Loach inspired" track.

It was an offshoot of Fiddlers on the Roof (the first theme taken off the drawing board) made in 1997, and was extensively built with effects. A problem related to the racing flow or the track's appearance made the developers want to cancel the idea later in 1998.

Textures design mixes urban decay and squalor. Most of the walls are dirty, and some of them (including wooden doors) have bullet marks.

One of the ideas for the sound effects was domestic violence sounds that would be set behind some of the apartments' doors, among other sounds to help establishing the environment.

Confirmed obstacles are the descending stairs and an elevator shaft.

The source code leveldat.ccp file suggests that there was three different versions planned with the Council State theme, all called by the name Council State and numbered respectively. The same applies for the levels' folders, called BLOC1, BLOC2 and BLOC3.

Council State was also refered to as "TowerB" or "Tower Block".

Below are the screenshots shared by Paul Phippen to Re-Volt Wiki and originally posted in the article The Re-Volt 1999 Scrapbook Deluxe.

Rooftops of the Council State.

Another section of the track. 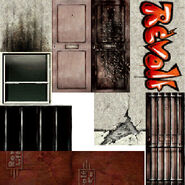 Primitive texture page of the track.