Col. Moss (also known by its full name Colonel Moss), is one of the many standard RC cars available in Re-Volt.

Col. Moss is an Electric-powered car configured under the 4WD drivetrain, classified under the Rookie rating.

The vehicle boasts remarkable top speed. Clocking in at a peak speed of 32 mph (52 kph), Col. Moss is the fastest car in the Rookie rating. This gives the vehicle the advantage of navigating through straightaways at an exceptional pace, allowing it to leave behind its competitors, such as Dr. Grudge and Volken Turbo. Its acceleration is not to be underestimated either, reaching its top speed by a respectable 2.14 m/s². This makes it lenient for Col. Moss to reach its top speed, and the combination of these two characteristics makes the vehicle intimidating in terms of swiftness.

Another one of Col. Moss' advantages is its excellent grip. This is extremely beneficial to the car as it is very stable when cornering even at the highest speeds. This is further supplemented from its 4WD drivetrain, being capable of driving in under many surfaces such as the freezer section in SuperMarket 2. Its weight is also appreciated in its rating, as its 1.5 kilogram body load allows it to take direct hits from Pickups nicely.

Despite having formidable stats in all of top speed, acceleration, and grip, Col. Moss is beset with a very substantial flaw, which is its cornering ability. Col. Moss is infamously known for having one of the worst turning radius stats in its rating. The vehicle has severe difficulties steering at various tight corners. Its high speed makes this worse, necessitating the use of braking or powersliding in order to complete corners. The vehicle's understeer can be compared to Pole Poz, however due to the pace of the Rookie rating, the problem overall is less severe. Regardless, this disadvantage has a large negative impact on Col. Moss' top speed, due to its inability to undertake corners at a fast pace.

In conclusion, Col. Moss' overall performance is benefited from a superior top speed and exceptional traction. However, its dreadful turning radius and weakness in corners is a significant impact on its viability in races. This causes the vehicle to rely heavily on wide open tracks instead, utilizing these sections in order to procure wins. 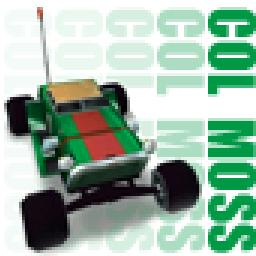 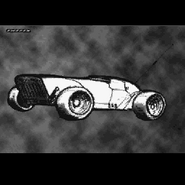 Another Col. Moss concept art, exclusive to the Dreamcast version of Re-Volt. 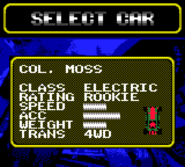 Col. Moss in the car selection menu of the discontinued GBC port.