Clockwork Too is the second of clockworks in the game. This car, along with Clockwork Wun and Clockwork Tree, are used as a piece of scenery of the Frontend, and can be seen in the options menu.

Through CARNIVAL, the vehicle is also available as a playable car in the PC and DC versions.

Clockwork Too is used as one of the vehicles on the circular round table in the Frontend, along with Clockwork Wun and Tree. This circular round table can be seen in the Options menu. All three vehicles roam around the table, frequently driving around the circumference of the platform, as well as colliding against other clockwork cars. These occur to serve as an 'eye-catcher' for the players, most likely from the tedious procedure of adjusting settings within the game.

Clockwork Too more or less shares its parameters with Clockwork Wun. Its top speed is quite poor, peaking at only 29 mph (46 kph). Its acceleration of 1.35 m/s² is also unremarkable. As such, Clockwork Too is quite sluggish despite its classification in the Pro rating. Like Clockwork Wun, handling is acceptable, but has the main disadvantage of being unstable, losing control upon entering inclines. 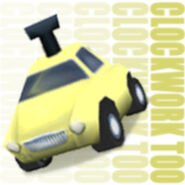