This page refers to the fourth clockwork in the game. For other meanings for "Clockwork", check Clockwork (disambiguation).

In comparison with the other three clockworks, Clockwork is the only one that fits well with the Pro rating. Clockwork uses the base model of Clockwork Tree's.

Clockwork is extremely fast. It has an amazing top speed of 42 mph (68 kph), falling behind the top speed of Cougar's. Its acceleration is no slouch either, fitting at a respectable 2.52 m/s². This makes Clockwork a very swift and nimble car, which is supplemented thanks to its small size.

In terms of handling characteristics, Clockwork's turning radius and grip are acceptable. Its turning radius is decent, but the vehicle will have to slightly slow down at tight corners due to its immense top speed. Its grip is forgivable thanks to its 4WD drivetrain, being fairly stable even at the highest speeds.

However, Clockwork has many drawbacks that makes controlling the vehicle quite difficult. As it is small, it only weighs in a mere 1.2 kilograms. This makes it vulnerable to Pickups, and is quite dangerous upon contact with items such as Fireworks due to the vehicle's traveling speed.

The vehicle's biggest flaw though, is easily its stability. Like all clockworks, it has a very small wheelbase and suspension. As a result, they do not absorb impacts from sharp ramps very well. Clockwork in particular will lose control in many situations, such as jumping off the ramp or landing from a drop-off. The vehicle also has a high tendency to spin out upon contact with walls or obstructions.

Overall, Clockwork boasts excellent top speed and acceleration, but suffers heavily from its small size and stability problems, similar to Advanced rating R6 Turbo. This makes the Clockwork Carnage mode very chaotic, hence its name, but also very fun. If not for Clockwork's flaws, the mode would instead be quite tedious. Ultimately, Clockwork's advantages and flaws is used a fundamental basis for the mode. 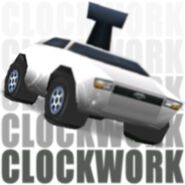 Retrieved from "https://revolt.fandom.com/wiki/Clockwork?oldid=18509"
Community content is available under CC-BY-SA unless otherwise noted.