The Car Selection Screen is a part of Re-Volt's Frontend menu. This screen shows the player the available vehicles that can be chosen to play in the many tracks of the game. The Car Selection Screen differs in the PlayStation version, with a menu consisting of three blocks which can be scrolled horizontally to view the rest of the vehicles, and in the DreamCast version, where more boxes are added to the existing boxes, shaping the stack to a form of a pyramid.

Cars can be scrolled and browsed through by using the directional arrows on the keyboard or standard game pad. Controls may differ due to the different hardware connected or device, system or console. When a car is selected (using enter or any other command), its box moves from its position to the floor, then it lifts, exposing the car as a 3D rendering preview. This feature does not apply to the PlayStation port, for technical reasons. Once the car has been previewed, the Frontend menu shifts to the track selection.

Boxes of cars that are not intended to be accessible or custom creations (PC only) have on its front an image of a car covered by a white sheet and red question marks at the background. Cars that were not unlocked yet have their boxes covered in brown paper with a dark question mark printed on its front. These cars must be obtained with the required obtain method so that they will become available.

The PC ordering also applies for the Nintendo 64, except that the present special cars are not accessible.

Carbox art of Trolley and Clockworks were made by RV Passion. Probe UFO and Mystery carboxes are from the Arcade version.

These cars come after Mystery in the car selection screen. This ordering also applies to the Playstation version of Re-Volt, excepting that BigVolt and BossVolt are not included, nor the present special cars are accessible in this version.

The Arcade version has a completely different ordering than the other ports, and not all cars are present. 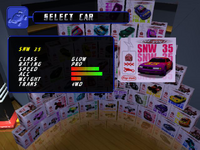 Car Selection Screen from Dreamcast version, with more 14 additional car boxes. This boxes stack have become an optional integration of RVGL in 2016. 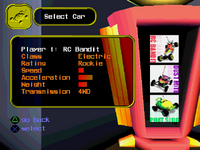 Car Selection Screen from the Playstation version. Boxes are displayed in groups of three. When the player navigates to the next group, the three boxes revolve and shows the next three cars according to the boxes ordering. 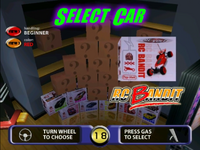 Car selection screen of the arcade version. A Car logo is displayed below the box and is possible to change car skins. Also, some boxes are not present in the stack and statistics are not shown. 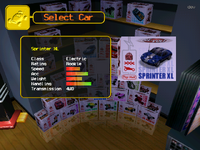 Car selection Screen from DEV version, where a handling meter is displayed and the NY 54 (Loaded Chique) box have a missing image. 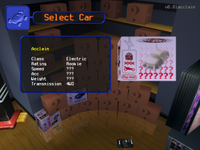 General aspect of the car selection menu seen in demos. 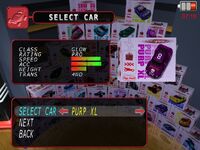 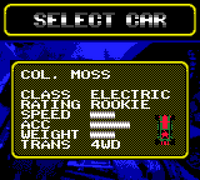 Retrieved from "https://revolt.fandom.com/wiki/Car_Selection_Screen?oldid=18279"
Community content is available under CC-BY-SA unless otherwise noted.