Candy Pebbles is one of many standard cars available in Re-Volt.

Candy Pebbles is a RWD-powered Electric-operated car, classified under the Amateur rating. This car, along with RC San are the first cars to be unlocked in Championship mode.

Candy Pebbles is known for its straightforward performance. It has a decent top speed of 34 mph (54 kph), which many of its competitors also possess. The vehicle also has an acceptable weight of 1.3 kilograms, which is satisfactory for its rating, being capable of taking hits from Pickups, but not too consistently.

The vehicle's most formidable stat however, is its cornering ability, which is among the best in its rating. It has a tight narrow radius, as its front wheels are able to snap quickly to the direction the vehicle is turning. Its turning radius is sufficient enough to provide Candy Pebbles exceptional maneuverability in corners speed-wise, reducing the necessity of the use of brakes upon entering corners.

Unfortunately, Candy Pebbles' overall performance is also perplexed as some of its characteristics are rather dull. Its acceleration is noticeably sluggish, reaching the rating's 'de facto' top speed by only 1.8 m/s². Other vehicles such as Aquasonic and Mouse possess the same top speed as Candy Pebbles but accelerate much faster than it, netting the vehicle as the slowest accelerating car to the modal speed. This stat only surpasses Genghis Kar, however, Genghis Kar is much faster than Candy Pebbles in terms of top speed.

Candy Pebbles' grip is very dubious, lagging behind its competitors at times. Although this can be managed with extra caution and a solid level of technical skill, the vehicle has a high tendency to slide, especially when speeding downhill at fast speeds or abruptly making a sharp turn. Running under a RWD drivetrain does not help either, causing issues in the freezer section of SuperMarket 2.

In summary, Candy Pebbles is known for possessing decent top speed, weight, and excellent cornering ability. However, its overall performance is very middling at times, due to the car having unremarkable stats in grip and acceleration. 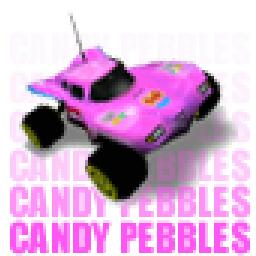 Candy Pebbles in Toys in the Hood 1. 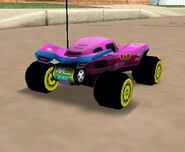 Candy Pebbles logo from the Arcade version of Re-Volt.

Retrieved from "https://revolt.fandom.com/wiki/Candy_Pebbles?oldid=16403"
Community content is available under CC-BY-SA unless otherwise noted.