CGW is a car exclusive to the Computer Gaming World distribution of the Re-Volt Demo.

CGW is a car made for the Computer Gaming World distribution of the game demo, as the distribution's flagship car. The car has its body based on Humma, which also appeared as the Acclaim car in the company's respective demo. As the pioneers of the known demo builds alongside the PC Gamer distribution, the car's textures were relatively simple, such as its basic headlights.

Like PC Gamer, CGW is an underpowered car. Its top speed of 30 mph (48 kph), and acceleration of 1.92 m/s² (almost 6 seconds to reach its top speed) are below average in its rating, making the car feel very sluggish at times. Its turning radius is great as a result of its slow speed, however its grip leaves much to be desired as its body is based on Humma's, with all four of its wheels skidding out of control if one is not careful. 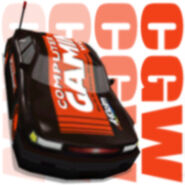 CGW statistics as seen in the CGW demo.

CGW cruising the streets of Toys in the Hood 1. 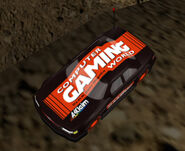