Botanical Garden is a standard track available in Re-Volt. It is the last track in Bronze Cup and the fourth track shown in the Track Selection Screen. This track is themed as a greenhouse with many elements of nature. It includes many plants, bushes, particle effects, and sound effects that make it to be a rather realistic racing line.

Botanical Garden is one of the most detailed levels in the game. Tropical plants can be seen in the entire race, and the sound effects contribute a lot for the ambience creation. The racing line travels through indoor and outdoor places, and mixes both artificial (man-made) and natural geometries/surfaces. Its layout differs from the other Bronze Cup tracks. It is not as not narrow as Museum 2, and has a reasonable racing line close to SuperMarket 2 in terms of length.

The exit brings into a right elevated bend. After an immediate left turn, players then travel across a bridge in the garden. The path then branches off into two directions, which converge shortly after. A wide 180 degree turn surrounding the garden's fountain then ensues, leading into a narrow tunnel. At the end of the tunnel is a ramp, landing the racers on an elevated platform. A small straightaway follows after, and vehicles encounter a very large drop-off that lies just before the start of the greenhouse, completing the lap.

The most challenging aspects of Botanical Garden is undoubtedly its large sudden inclines. This include areas such as the jump after the fountain, the steep slope after the 90 degree corner, and the greenhouse's exit. This may prove troublesome for cars that have poor grip, acceleration, or stability, as these corners can make them spin out, sluggish, or flip over respectively. Vehicles of this nature include Genghis Kar or Mouse. It commonly brings difficulties for the beginners of Re-Volt 2 or Re-Volt 2: Multiplayer, forcing them to upgrade their cars and improve their top speed to get a better experience of the race.

The jump after the large fountain in particular is very detrimental in the race as it lies just before the end of the track. A massive mistake will make the vehicles unable to land on the platform, which forces them to go around it, wasting precious time. The narrow greenhouse exit is also a major obstacle, especially in reverse, as its steep elevation and tight curve can cause many cars to lose control, ruining their chances of winning the race.

As a track with bumpy and steep terrain, it is advised to use a well-rounded car, especially those with good acceleration and stability, such as RC Bandit. There are also two narrow passageways; one after the greenhouse, and another after the fountain. It is advised to use trap Pickups there such as the Clone Pick Up or Oil Slick, to increase the chances of landing the hit. This in particular is very useful after the fountain, as they may not make the platform, giving the racers ahead a larger gap.

In terms of the best racing line, the right path from the branch is noticeably faster as it lacks the upward inclines. It is also the route preferred by the AI. In addition, there is also a shortcut that allows players to cut right through the fountain instead of going around it. However, it is difficult to take due to how narrow the path is. Vehicles with good control and high acceleration such as Harvester can take advantage of this shortcut more easily.

The Global Pulse is located on the left of the steep slope after the two lakes. The border of the left lake can be used as a ramp to nab the star much faster. It is easier to take the star in reverse.


The Practice Star is located inside a secret area. The entry is on the left of the arch (seen on the gfx image), right beside the start line.

As the secret passageway is not present in the PlayStation version, the star is instead located at the far right side on the garden bed just before the first steep ramp. 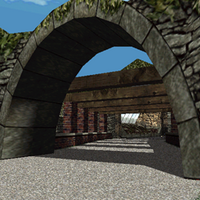 Inside the greenhouse, after the first slope.

Mouse running to the fork route of Botanical Garden.

Botanical Garden's fountain and the shortcut behind it.

The hazardous jump of Botanical Garden.

The large slope near to the end of the lap.