BigVolt is a vehicle exclusive to the Dreamcast and mobile versions of Re-Volt. It is also an optional integration for newer builds of RVGL. BigVolt is also the first console car listed in the Car Selection Screen in the aforementioned versions.

BigVolt is an Electric-operated car with a 4WD drivetrain, classified under the Rookie rating. Its design is unique, resembling a monster truck.

BigVolt, hence its name and design is very heavy. It weighs in at an immense 2.3 kilograms, far above the masses of the other vehicles in the Rookie rating. Its weight is only surpassed by Phat Slug by 200 grams. The vehicle's high mass grants it amazing resistance to Pickups, allowing it to tank items such as Fireworks effortlessly.

In other terms, BigVolt is known for its plethora of respectable stats. It has a remarkable top speed of 32 mph (52 kph), surpassing the speeds of many of its competitors, only falling behind Col. Moss. This allows BigVolt to perform well in straightaways, keeping up with its rivals easily. Its acceleration is no slouch either, clocking well at 2.32 m/s². Its acceleration stat is significant enough to make recovery easy and swift.

BigVolt's handling characteristics are also praised for being well-rounded. Both of its turning radius and grip are appreciated for its rating. The vehicle is able to turn without slowing down in some corners, however some of the tightest corners will require use of powersliding due to its size. Being a 4WD monster truck, its grip is manageable, being capable of running under many different surfaces in the game.

BigVolt's stability on the other hand, is unfortunately quite unremarkable, and is the vehicle's main drawback. Its firmness on the ground is very awkward and unpredictable. This is attributed due to its suspension. Its shock absorbers are considered too soft and bouncy for the vehicle and as such, BigVolt demonstrates noticeable difficulty on bumpy terrain such as the sharp inclines in Botanical Garden. As the vehicle lands, its suspension bounces up, lifting the car slightly. At this stage, any steering will cause the vehicle to spin out of control, making caution an imperative factor for the vehicle.

Overall, BigVolt boasts many all-around stats. It is decent in all of top speed, acceleration, and handling, with a very high emphasis on weight. However, it has the main flaw of having sub-par stability, which proves to be a major annoyance to the vehicle. Ultimately, BigVolt is viewed as a viable car in its rating with the AI performing well with this vehicle, however it demands the user firm knowledge of the terrain and elevation of many tracks. 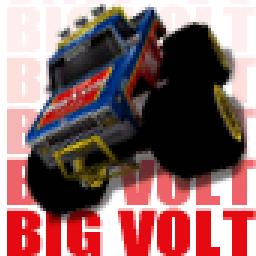